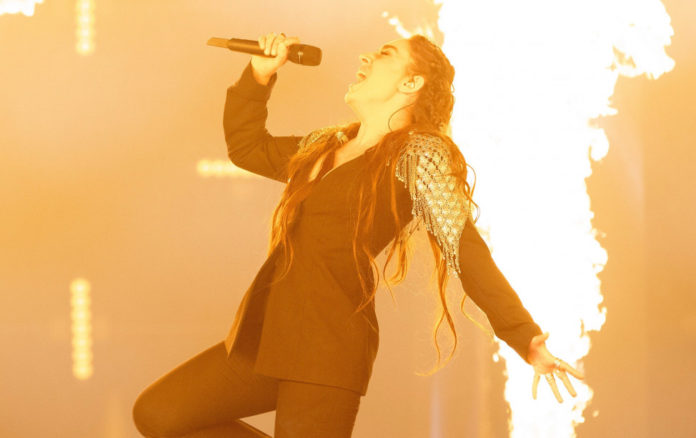 We move onto the second semi-final with Armenia taking to the stage for their second Eurovision 2019 rehearsal.

Srbuk was dressed differently today – in a black pant suit with silver shoulder pads and small chains attached. It removed some of what looked like self consciousness in the short skirt she wore then other day. For those who care, she’s also braided her hair.

Things started well with close-up shots to engage with the viewer. Despite being alone on screen, Srbuk owned the space. Projected glass on the stage shattered (largely) in line with her moves, and we saw a hologram effect that tied in with the huge key change – though maybe the camera should have been pulled tighter.

On the downside, we saw stage crew in too many shots and there were missed cues. These are things that are easy to fix. On the final run-through we were treated to pyros.

I’m not sure about the final shot – the cameras panned wide, showing Srbuk already (literally) walking out. I get the point, but it might lose the viewer connection.

The running order might be against this one, coming early in the show. There are a number of ‘sure fire’ qualifiers, and Srbuk sits strongly in the middle at this point. If it makes it through, and gets a good spot in the final, Armenia could turn in a decent result.

A costume change here. This time she’s in a plain black suit with massive chain mail epaulets, and her hair done up in rustic plaits. Still got the mostly plain background, and I’m not sure if it stands out as an opener.EUROVISION APOCALYPSE