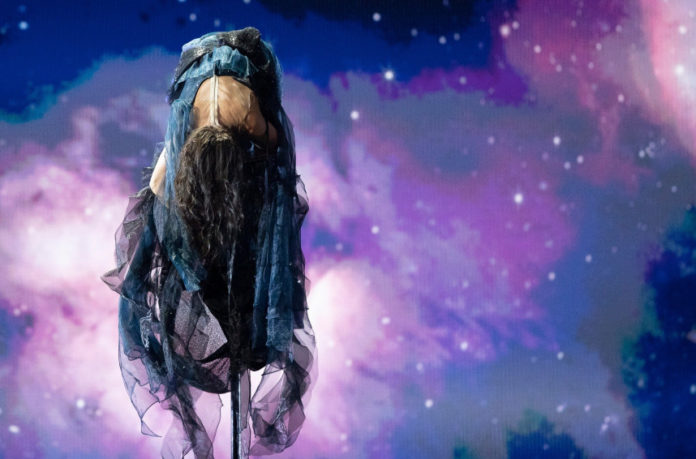 This still looked absolutely fucking ridiculous on the TV Screens. That said, they managed to iron out earlier issues with the matte world on the television screens, but Kate was still flung around the stage in the final minute of the song, and appeared to rotate into one of the backing singers on more than one occasion.

I also suspect (quite heavily) that Kate wasn’t doing all of the lead singing, because, well … she’s on a bloody bungee stick contraption, and who would be able to?

I’m still not happy that in the final minute the narrative got handed to off-stage backing singers, insofar as Kate didn’t sing “Nothing holding me down” – which I think she should. In truth, though, that’s a minor quibble, after all, SBS have clearly bought into the concept and performance.

I’m not too sure how the viewing and voting public will react.

16 November – Nothing holding me down

The EBU has issued invitations of participation in the contest to all active members. Associate member Australia does not need an invitation for the 2022 contest, as it had previously been granted permission to participate at least until 2023.

With COVID restrictions still very much a thing in Australia and likely to continue into 2022, participation remains unconfirmed for now.