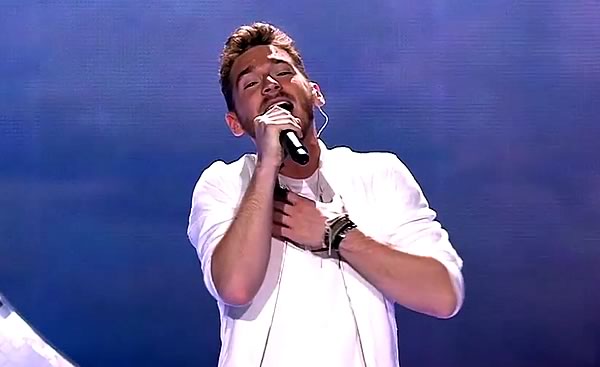 Nathan Trent is up next and he’s pulling a moony. No, he’s not getting his arse out (he’s not even singing the word when it comes up in the lyrics) although I imagine that would be quite appreciated here.

He’s firstly sat, and then stood on a glittery crescent moon made out of a glitter ball. Towards the end there’s a close up then a reveal of four backing singers who have joined him on stage, an effect that worked well for Poli Genova for Bulgaria last year, as it adds just enough extra lift.

There’s a backdrop of pinkish blueish clouds, creating the effect that he is – clunking metaphor alert – running on air! Well, shuffling around the stage on air anyway. It’s done with a charm and confidence that wins you over. It might be a bit cheesy, and the moon and colours do look like the Dreamworks logo, but he’s so damn likable that you’re willing him to go through.