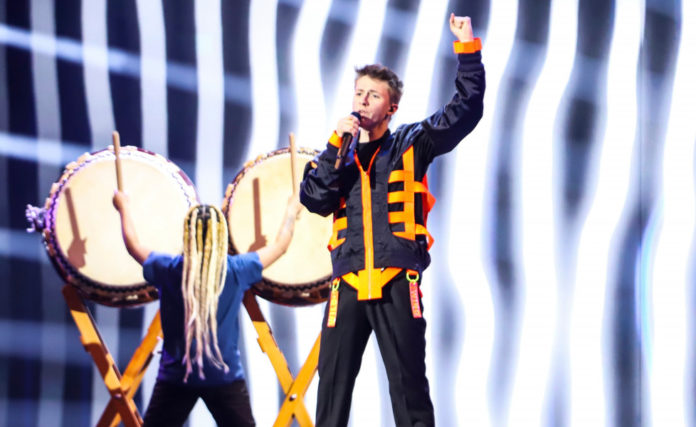 Elliot needs some serious styling och consulting and bloody fast. He wore a black combat jacket with red pull chords on the bottom saying “Wild” which hung by his crotch in a worrying fashion. They also had the big Korean type drums on stage, and that’s always a sure sign that the song won’t do well because, well, Freddy from Hungary for a start.

Vocally Elliot seemed a bit weak and wasn’t coming across as a strong or confident performer, but I caveat that with “it’s a rehearsal“, so there is a chance he might come back stronger as the week progresses. Today, though, it all looked a bit half-arsed and messy, even with only four people on stage.

There wasn’t choreography as such, just a teenage boy concentrating on counting out the beats in his head, so all his contrived hand movements towards the end were in the right places. He had a half arsed smirk on his face as well which, for me, didn’t help.

Here in our bit of the Press Centre, we noticed that the camera shots were too wide and it looked as though he’d escaped from school … he’s just so damn young.

Belgian commentators in the past have complained about us rubbishing their act before the semi final. On this evidence, same again!

28 September – My shoulder, my shelter, my satellite