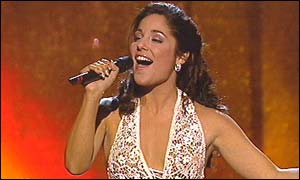 The first time that a “proper” crowd had been in to the hall.. This lifted several of the performances in the hall but, see what you think from my scribbled notes that I am turning into my review!!

1. Cyprus: The Fairytale that ETV chose for the postcard for this is “Aladdin”. Contrary to my other reports this really got the crowd going. 6500 mad Estonians out for a Friday Night were really supportive to this song. The lads really did seem to attack both the song and the camera and it will be a good start to the contest. However, if there is still one criticism, it is that there are still too many choruses in the song. Will not do badly… but will not win.. plus there will be no stripping!!

2. UK : Missed the fairytale here but it is the performance what counted here. Jessica did not do a bad job, considering she did not have her earpieces in at the start of the performance, and it didn’t really bother her. She stands at the front middle of the stage, which is dressed in orange for her performance, but that perfectly compliments her brown dress. Strong, confident notes and great backing vocals lead to a strong, confident performance of the highest order.

3: Austria. Fairytale in the postcard was Goldilocks and the 3 bears ( I think!!) Considering my man Manuel has got a throat infection, he did really, really well, but you could tell that something is not quite right with him though. In His blue jeans and brown and black top, he caresses the camera, does sly little smiles and winks and kisses to the camera. A fantastically sexy performance. But my only worry is his voice.

4: Greece . Preceded by Hansel and Gretel, the Greek Gestapo march onto stage.. sing for 3 mins. Then march off again. If anything it is a complete performance but he has trouble pronouncing certain letters in the word s’agapo, which make it sound odd ( only this bit, I hear you cry).. poor harmonies and god awful dancing lead to a naff and terrible performance.

5. Spain : Regular readers of this page will notice that I think that this is “ a pile of shite”, and that view has not changed… However this was the first “ crikey” moment of last night. She has put her contacts back in for this performance and she looked….reasonable……the choreography looks better ( though it could not get any worse…..) but she did miss some of the high notes and it detracted somewhat. The only Celebration that Europe will be having is that her fairytale introduction is Frankenstein (!)

6: Croatia. BE CAREFUL HERE… this is stunningly good. Certain other reporters think it is hite, but she still performs the arse off this song. In Black and silver and her whip to boot she caresses the camera with her sexyness and still twats the front row into submission. A fantastic, sultry performance that should score highly.

7. Russia. This is a prime example of how to turn a good song awful. They now look more like something from a bad gangster film about Essex, rather than a credible band. The harmonies in the song have disappeared and the backing dancers still detract from the performance, but it did get a large hand in the hall.

8. Estonia. Oh dear, we could all be back here next year I think….this is one very scary rehearsal… she knows that the crowd expect a good performance, and she gives them one (!). Confident, strong, fantastic.. Do not be surprised if Estonia are in the top 5, if not the top 1.

9. Macedonia. MKRTV should be wary of these kind of songs. The postcard was “The Missing princess” and this summed up the performance really, as something missing… talent perhaps…. As a performance it has everything. Smoke, stripping, overacting from Karolina but it does not come off for me. Also her hair is tied back so tight that her face looks like it has been lifted several times. Possible Bottom 7

10. Israel. Another “be careful” moment here. Coming on after thee “Thumbelina” postcard, Sarit remembered to start the song this time, and she was less nervous than in the first rehearsal. Typical Israeli choreography and great harmonies give this a haunting quality in the hall. If she does not score well, we all know why…. But she should do.

11. Switzerland. “ this is awful and don’t vote for it”. ( only cos I have a side bet on with people that Austria will beat it!!) Now seriously.. it’s a case of Nice face, shame about the song really. She does have that naughty twinkle in the eye when she sings the song, and it has a really good finish. But it will not be remembered enough to get hatfuls of votes.

12. Sweden : Having reverted to their silver costumes for this it is , In My Opinion, still not the one. They give arguably the best performance of the night, and strut their stuff around the stage as you would expect. However I think thit will be overlooked by enough juries to rule it out as a contender.

13. Finland. “ Be Careful” alert again. Laura is a cracking performer, and it shows in this performance. She moves well, sings well, looks fantastic and gives this song plenty of attack. It gets a fantastic reaction in the hall and she has that grungy quality that should go down well.. Is Finland’s first 12 points in 25 years on the cards. Well it should be.

14. Denmark. Oh Dear, it looked so promising, but falls as flat as some of her notes. No, she isn’t a bad singer.. she just needs to relax while she is performing. We all know it is a song about rejection, but being tense on stage does not get the best out of this song.

15. Bosnia and Herzegovina. I like this, so much so that I cast my press vote for it!! This harks back to the good old days of the contest, an uptempo stomper that someone described as “ a tune to play in a comvertable with the roof down.” Do them a favour, pick the phone up.. you know it deserves it….

16. Belgium. Another one of those “ be careful” ones. I did have half of VRT to my left they were going MENTAL.. On their chairs pointing at strategic moments, even Sergio pointed at them before he did his backflip. It is another total performance which will get its share of votes from, well, everyone.

17. France. Again, another one in the frame I feel. Sandrine seems to be an understated performer, singing out of the side of her mouth, but she has so much presence in her purple dress and mystical backdrop that she gets a good response not only in the hall.. but potentially everywhere.

18. Germany. Corinna cant live without a tune it seems on this performance, she missed the high notes and it was vaguely reminiscent of I Believe in God. The scars are deep for that one, and she is in danger of doing that again when it matters. She does get the biggest reaction in the hall by far, but it will all depend on her voice.

19. Turkey: By far the best choreography in the contest. Buket is in Purple for this one and her backing singers compliment the performance adequately enough. She should do well… but wont set the world on fire.

20. Malta. Another one of those I am afraid. She has a cheeky grin and that “something” that could just get them voting. A confident performance which will get the credit it deserves. The glitter looks fantastic on TV and overall it just might get the nice votes!!

21. Romania. “Tell me why” is the question all of Europe will be asking. They look so out of place here it is painful, but the song is not half bad outside the Eurovision Arena, but I don’t think we are off to Bucharesti next May

22. Slovenia. Another total performance from them. However it got no reaction at all in the hall. They are vocally competent but this will be what the contest is remembered for, and that is a shame.

23. Latvia. Another for the shortlist ( which is getting ever longer), she strips outfirts in this and she performs it really well.. this mightn’t win… but it will come close.

24. Lithuania. This gets a surprisingly good reaction here. I think it is the “aww bless” factor. He does look quite good..if a little drugged up I think. Potential Outsider!!