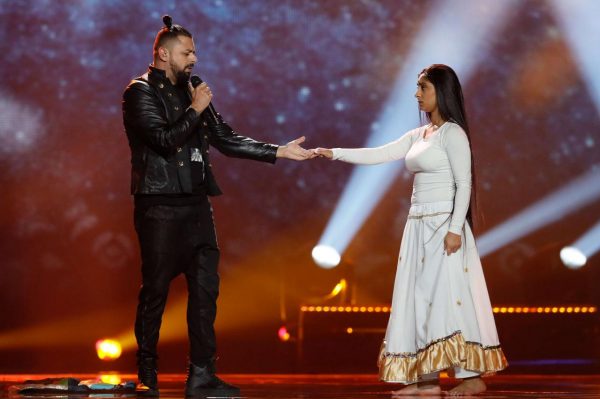 So then Hungary, what is this you have brought to the table? Why it’s ethnicity, that’s what this smells of. Roy D Hacksaw (of this and other parishes) likes this because of the ethnicity. I think it’s just OK.

I can see what they are trying to achieve with ‘Origo’ – it’s a simple three-person staging of a song that doesn’t need to do too much to get noticed. Joci himself, along with a dancer on the main stage. A violinist on the satellite stage.

Choreography needed to be minimalist in order for it not to distract from the overall vibe, and it is just that. Your dancing woman isn’t doing cartwheels over the stage and she interacts with Joci at just the right point. The clunky rap style change is still there and to my ear it doesn’t mesh with the rest of the song – which, IMHO should have continued along the same lines as the rest of it but, hey, I didn’t write it!

Taken as a whole, it’s a perfectly serviceable song that is far better than some of the others I’ve heard today.

Having said all this, though, Hendrik the floor manager said “and now with Pyro” … which is worrying …  even if it was only on the circular main stage immediately before the rap.