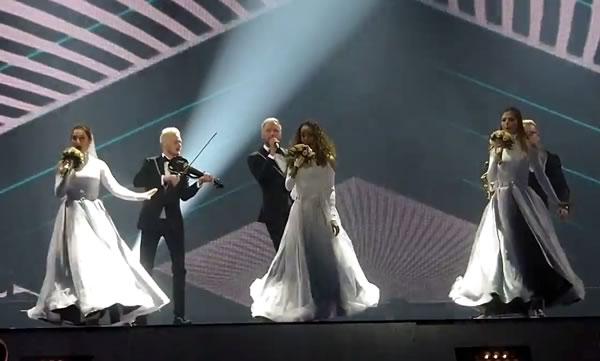 … no, not another horse, more like the one-trick pony that this was always going to be – but one thing you can say is that it’s polished. The stop in the middle of the second verse is awkward, to say the least – unless they fill it with something but I don’t think that they plan to.

As I said before they play up to “Epic Sax” and his new meme that will be available shortly after the contest has finished, no doubt.

They all know where the cameras are. They all know how to hit the right notes, and after some of the slowness and blandness before ‘Hey Mamma’, this song should be the breath of fresh air that the televoters need.

It does bounce everywhere and the dance movements that you can see are somewhat contrived, but then again, it could be argued argued all choreography is contrived. People might not get the wedding motif unless they have seen the preview video.

Love it or hate it, it’ll be qualifying.

And because it’s good to stay official too …