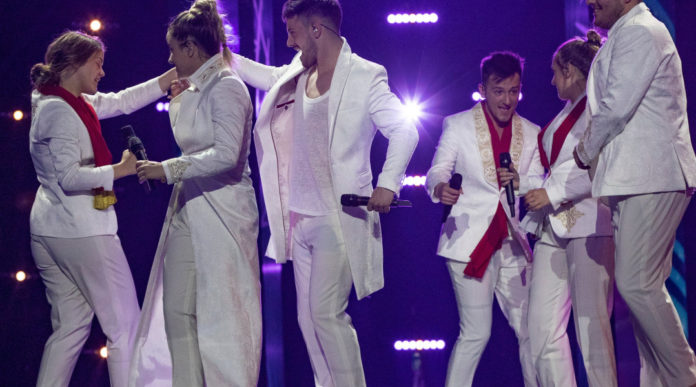 Montenegro are sunk. Sorry, but I might as well say it, having witnessed the first three minutes of their allotted on-stage 30.

Gone is the musical stave, and with it the last vestiges of anything remotely interesting.  Instead of that, they’ve taken the good-looking boy and pushed him front and centre. He featured in all the camera shots, clearly to distract from the song itself.

The middle of the song was just … forgettable … because it was only the one phrase of music in the chorus, filling the gap between the middle and the end

Towards the end came the key-change and the camera moved focus from the group to the back of the arena. This coincided with the only sign of movement during the whole performance: D mol formed a line in the last 30 seconds … presumably for the bus on the way back to airport after this performance.

D mol can sing, and that’s the travesty here. Their harmonies were spot on, but the turd remains the problem.

Overall, it was messy, boring and repetitive all at the same time, and that’s a skill that no one should possess.