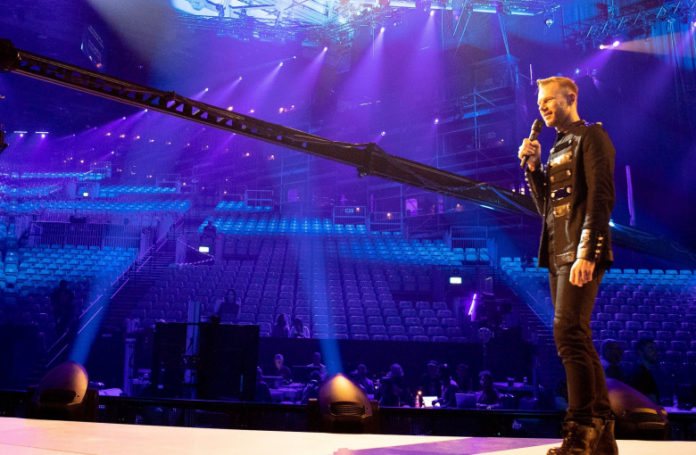 My first thought on this run-through was: “Why does the lead singer (Tom) look like he’s dressed for a uniform fetish party?” He seemed to have shined his dress uniform and the brass buttons really stuck out.

The presentation and production was a bit like the song: a sandwich. There was the obligatory backdrop reference to the Northern Lights in both the first and last parts, with Sami joiking in the middle.

I can imagine any irreverent broadcaster making the Swedish Chef joke again, because to British ears it really did sound like it.

Also, the trio had no discernible on-screen chemistry, looking like three soloists that just happened to find themselves sharing a stage. They very rarely, if at all, looked at each other.

My suspicion was that this relied more heavily on a concept rather than the song itself, because as a piece of music it’s fair to middling at best.

It’s qualifying, just, mainly because Norway has chums voting in this semi.

The National Final was their best performance but this is still a decent entry. Smoky floor effect and pyro during the joik solo. Still a fairly certain qualifier for me.Tellystats

Norway made its debut in 1960 and has only been absent twice since then. In 1970, the country boycotted the contest over disagreements about the voting structure, and in 2002, they were relegated.

Norway has won the contest three times. The contest is broadcast in Norway by NRK, which also broadcasts Norway's national selection competition, the Melodi Grand Prix.

Norway also has the two dubious distinctions of having finished last in the Eurovision final more than any other country and for having the most "nul points" (zero points) in the contest. The country has finished last eleven times, failing to score a point four times, in 1963, 1978, 1981 and 1997.

Norway’s MGP Started on 15th January and will have 5 Semi Final rounds and a Final.