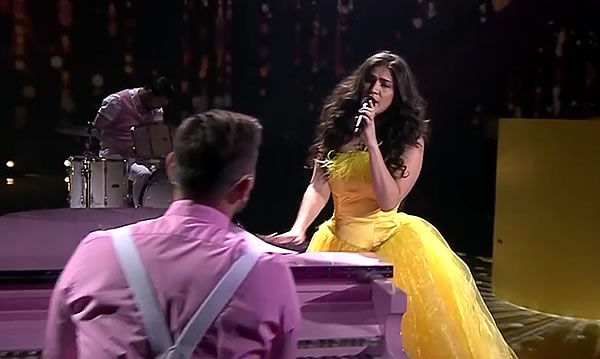 I’ve missed most of Norway, but if you’ve seen the video it’s not dissimilar. The discussion on my desk is about the legitimacy of the vocal sampling. People who own more anoraks than I do are poring over interpretations of the rules. I’m having some wasabi crisps.

I am though watching Switzerland, and this is a song that has come up from nowhere for me. I now really like it. The singer is in a huge yellow frock, the only one really sporting canary this year, which at the moment has a marabou trim along her décolletage. This might be dropped for the show as there’s an unfortunate moment when the wind machine kicks in later in the song, and blows abouit with a bit too much gusto. She’s atop a spiral staircase which she eventually descends, has a mooch about the piano then a stroll around. We don’t see enough of the other two which is a shame. I doubt this is strong enough to get through, but they’ve made a decent job of it. I never thought I’d be saying that when I was watching the national final.