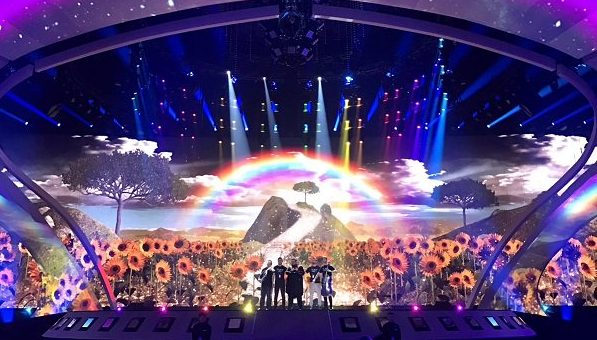 You aint seen NOTHING yet!

“This time with Pyro” has a whole new meaning now …  Jacques really does the first stanza of this song turning side by side singing both parts and being the campest thing you have ever seen. He’s got backing singers and a cellist and a violinist on stage whilst he’s doing this.

Then the fireworks start in the middle of the song as he does (what looks a bit like) some sort of Black Power symbol (he’s wearing weightlifting gloves) … and then at the key change there is a waterfall of fire and he goes for the big ending … and then there is the background screen that shows flowers and rainbows and … shit.

I’ve been coming here for 16 years and I can honestly say I’ve never seen anything like it. HRT are a competent broadcaster and THEY chose HIM and worked on this song for SIX EARTH MONTHS and came up with …  that.

It actually makes you want to go up to the HRT head of delegation and say: “What the actual fuck are you playing at?”

The press centre guffawed as one for three minutes as this … thing was presented to us. But the worst part of it is, I don’t know if it’s a joke entry. Are HRT treating it as a joke? Does Jacques know he’s being laughed at? Is it serious? I genuinely don’t know.

One thing I do know is that it’ll be played on those clip shows for years, and that’s not a good thing.