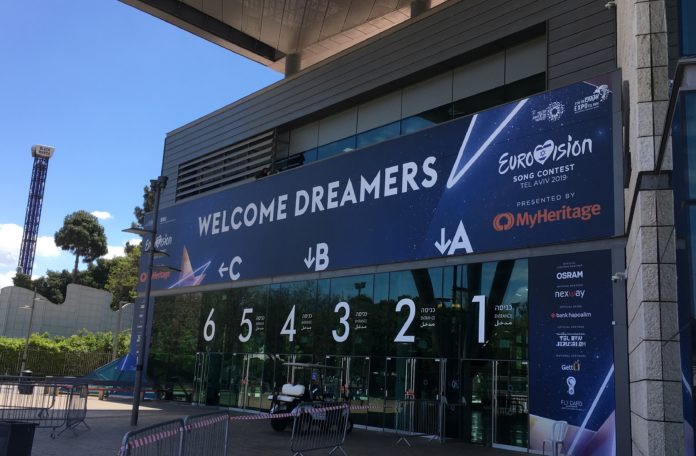 With the start of today’s second run throughs we’ve been allowed access into the big hall here at the Tel Aviv Expo, and it’s been quite an interesting visit. From the big sign above the door shouting out “Welcome Dreamers” in bold lettering, the whole place is inviting and roomy. But it’s when you get into the performance space that your eyes start to melt. Because what looks massive on the telly screens here in the press centre, is actually a pretty intimate space in reality. 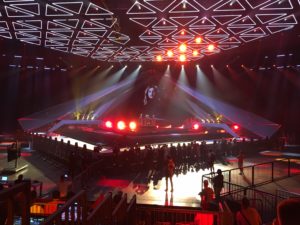 The floor space is the biggest surprise, and it teeny tiny compared with other years, and one suspects that the moshpit and golden circle are there more as visual props than any kind of actual audience consideration. We’ve been hearing that some people with tickets in this area have been moved to the seats ‘for security considerations’ – although many are reading that as ‘to fill in the still-empty seats’. One suspects that those who remain in the frontal areas will be given full training as to how to make themselves look bigger on the telly, just like you do when you’re an extra in a film shoot – which is effectively what they’re becoming. 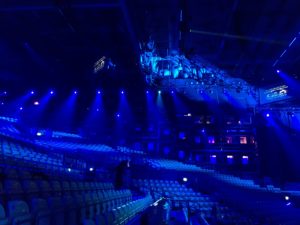 The commentary booths look a little precarious, though. Cosy little boxes squeezed between some scaffolding alongside the sides and the back of the hall, they look more like the scenery from a Mad Max style Thunderdome to anything we’ve been used to before. I hope the commentators don’t get vertigo! 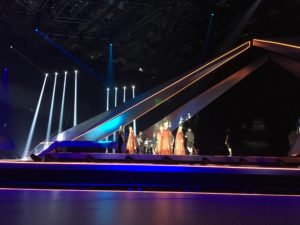 The seated area was also a surprise. It’s as steep as all hell, and nicely wraps around the stage, as opposed to having the seats dictate the

shape of the performance area, as you’d get in the more traditional enormodomes. That’s one of the joys of these kids of blank exhibitions spaces. They may have their limitations as far as a physical show goes, but they’re so very versatile that they may well be the future of big productions of this size.

What is key here though is that everywhere we looked had a near perfect sightline. There may be some slight issues around the sides, but we always like sitting there so that we can watch the crew anyway, and such areas bring their own fascinations.

It’s clear that this whole structure has been built as a television studio rather than a gig arena, and by the magic of television, a tight space has been made to look absolutely massive on the screens.

See all the images as a gallery