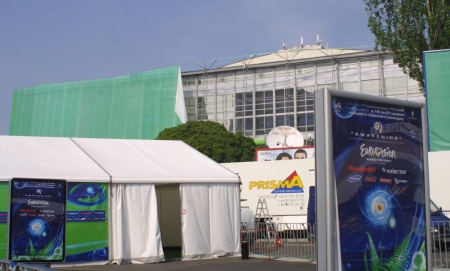 First off, sorry about a lack of posts yesterday. You might prefer it that way, but my web connection seemed to die on me and I couldn’t give you all the news from the front-line as I’d hoped.

And there’s been all these parties,carouse see…

The opening do was spectacular. The usual posh frocks and rabid camera crews filming anyone who looked remotely showbiz scattered the huge patio outside the beautifully ornate Wedgewood blue Marinsky palace – soon to be home to the guvnor of this big old gaff. Far outweighing last year’s opulence, this year we had a good 200 yards of food, which led us down to a spectacular view of the Dnepr, the woods beyond, and Phil’s hotel far off in the distance.

There was Cossack dancing, sword fighting and a big protest out the back by the disgruntled folks that live in tents in the woods, who were playing banging Russian techno and hooting their horns. Sadly most of the pampered never got to see it.

Undoubted stars of the evening were Wig Wam, who were deluged for photo opportunities all night and never failed to refuse. The Irish were on their now customary march to hedonism (well, one in particular…), The nice Portuguese lady was festooned in feathers, and despite her silly hair, would talk to anybody, and Javine just kind of floated around gracefully from snap op to snap op. The Ninja birds were up for a bit of a mind, and the keyboardy one was even seen being carried to the lavs after a bit of excess. We like them. Anyway, after far too long harassing international pop stars we was off into the night, where we ended up in the square as mentioned previously – which for us was as much of a party and the big plush one we’d just been to.

The next day and it was back to the usual three-times-a-night business. Ruslana was putting a huge show on in the Arena’s outdoor bit, but we got there a bit early and went to the bar to have a drink, only to find the Viking and Irish party winding down. At least we got to get some drinks for free, and watch the unlikely sight of little Joe (him again – the boy’s fast becoming the star of this thing) singing both Geir and the Stennmark lad off the stage to Suspicious Minds. Now who’d have thought that was going to happen?

Then out to the big one. It was a charity do for Chernobyl victims, and of course, with herself playing it was always going to be massive. A few Eurovision offered some early support, including a magic GreenJolly moments, and some reassuring reactions for both Greece (obviously) and Germany (perhaps surprisingly). The then this huge buzz of excitement went around the place, and everyone started turning round manically and bouncing with joy. Who was that gnarly-faced man on the balcony? By heavens, it’s Yushenko himself. And when the announcer confirmed he was in the house, the place erupted, with kids chanting his name and the whole place rubbernecking to get the best view. Now you can’t imagine that happening for Blair now, can you.

Anyway, I’m rattling on now, so I’ll brief it up. Ruslana gig – great. Leather, whips, fire and fountains – and loads and loads of happy happy locals bouncing around to her. Highlight of the trip so far.

Then we went upstairs to the joint UK/Spanish/French/Monaco party, which just turned into a huge bun fight with as many artists as humanly possible clamouring onto the stage to do a turn. Best of the night were our girl Javine doing it acoustic, like with writer John Themis giving it big guitar, Chiara showing us both her hits, and Alex Panayi, on stage to help out the Greek bird, doing a spine tingling Sti Fotia (forgive the spelling it’s been a while.) It looked like it was going to be a long night, and we were dog tired from all the days marching about, so we decided to call it a day after 17 acts had done their do. Actually it was Nuno Resende strangling Bohemian Rhapsody what did it, but we were being polite.

Right then, it all gets serious from here on in. More news from the front, as it happens (if I can get a connection…)