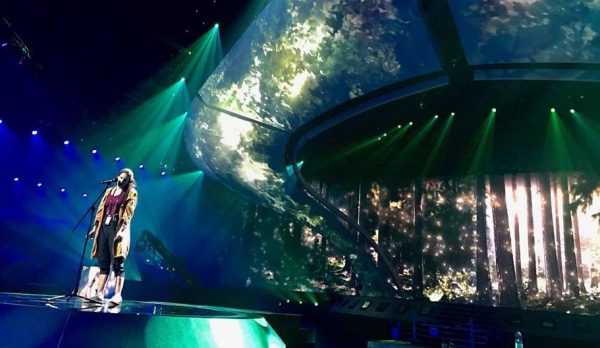 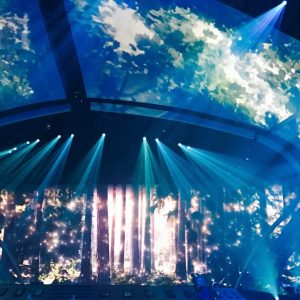 All good fans know that the guy who will actually sing this song next Tuesday won’t arrive in Kiev until the dress rehearsals. Health issues mean Salvador Sobral had a stand-in today. His sister -Luísa Sobral  – performed at this technical rehearsal – but she wrote the song, so why not? Disappointingly though, she didn’t turn up wearing his oversize jacket and sporting a hipster goatee.

“Amar Pelos Dois” is tipped to do well by contest fans. And who am I to deny that simple staging will enhance a gloriously old fashioned song. And having seen the light effects, I’m cautiously optimistic.

The Portuguese delegation has elected to have their man perform on a small satellite stage in among the audience – ignoring the risk of the mood being broken by a giant pink plastic hammer or an inappropriate flag.

It remains what it always was, and until we see Salvador in situ, it’s hard to say how well this works in Kiev.

And that’s it for today, dear reader. The boys will be back in town tomorrow to offer reviews live from the venue.

What’s your stand-out moment? The official site thinks everything is fantastic, I’d imagine you might have something more to say?