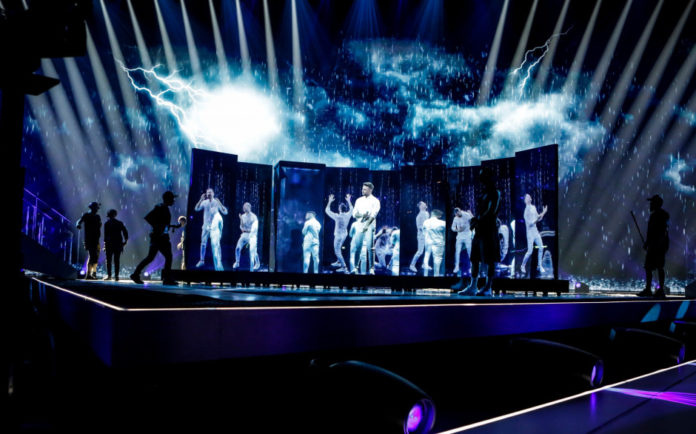 The first thing to tell you is that there were a lot of mirrors and screens to get on stage. All  in the 32 seconds between songs. Today it took twelve minutes to get Sergey’s set in place.

This three minutes of television wasn’t about Sergey’s singing voice, which seemed to be a little bit weak on the top end of the notes – but the Russians knew that and now, so do we.

It was all about the performance, and Russian television have thrown all their Roubles at it.

Background projections showed Sergey doing all manner of poses and genuflecting to draw the viewer into the staging “concept”. There were only a couple of sweeping shots of the hall (as you might expect) because everything was literally all about Sergey.

I’m glad they haven’t gone totally overboard on the staging, because the song doesn’t need it. The creative team has nudged things towards “the west” rather than “the east”.  To me, a complex song (albeit with dodgy lyrics) came across as clinical and I’m not 100% sure how might register with the average televoter.

But of course it’s going through.