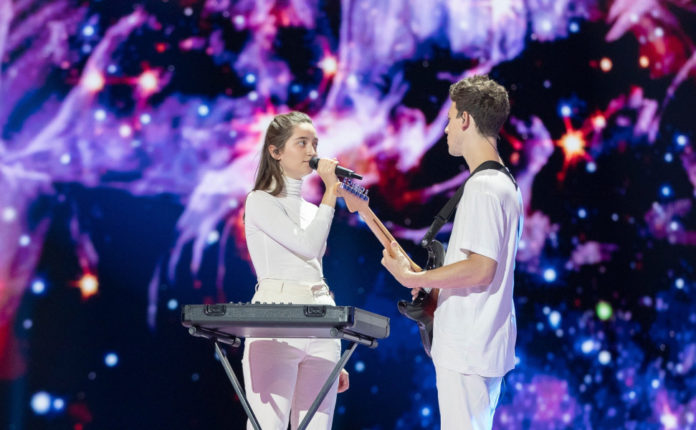 Unlike Poland who came on before lunch, Slovenia’s pair Zala and Gašpar turned up and their vocals were spot on from the first note to the last.

The staging stayed intimate: just them, Gaspar “playing” the guitar and pressing buttons on the synth (conspicuously not plugged in) in time with the music. The background was a generic solar system and looked amazing. Also, a note on their costumes, I’m not sure if they were wearing them today. if they were, then it’s to be an all-white combo.

This was clearly the best staging so far today. It looked and sounded great.

But (and it’s a big but) is this a song that people are going to actively vote for? It certainly has an ethereal quality and Europe could confuse ethereal for boring, due to the monotonic tune and the lack of interest between the performers.

This song is a curate’s egg of a thing … and I’m not sure which way Europe will go.

1 September – Think with a loud voice and hope

4 July – This is the day of the most beautiful dream