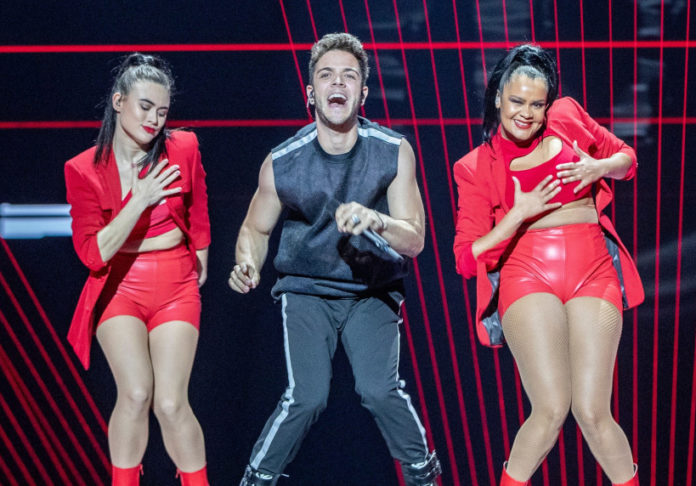 First off, apologies about missing Lativa, It’s not deliberate. I had a mountain of work to do, but did take advice from people at the other end of our table, who said it was a clearing the bar song; you listen for about 80 seconds then walk out of the door. That’ll be enough of that then …

As you might know, I like my cheap Latin beats, and there is no cheaper common denominator than Swiss entrant filthy Luca.

This song has all the right ingredients, but I thought there had been a trick missed with the staging. On further examination, I was so wrong!

First time through, things felt a little bit disjointed and I thought Luca failed to tell the story of the preview video. Rehearsals are there for things to go wrong and/or to get things sorted out and that’s precisely what the Swiss did.

By the second try-out, Luca seemed more comfortable with what he was doing (and said as much) and the backroom boys and girls leveled out the backing singer sound mix.

The dirty dancing also looked good on both stage and screen, with effects used to the full potential. One – when the beat dropped – made people in the Press Centre go “ooh”. There’s a lot of red and black (this year’s colours) and they gelled well.

As a minor criticism, Luca didn’t interact with the “she” of his song, and although that would have been nice, he did connect through the camera, and had enough about him to freestyle.