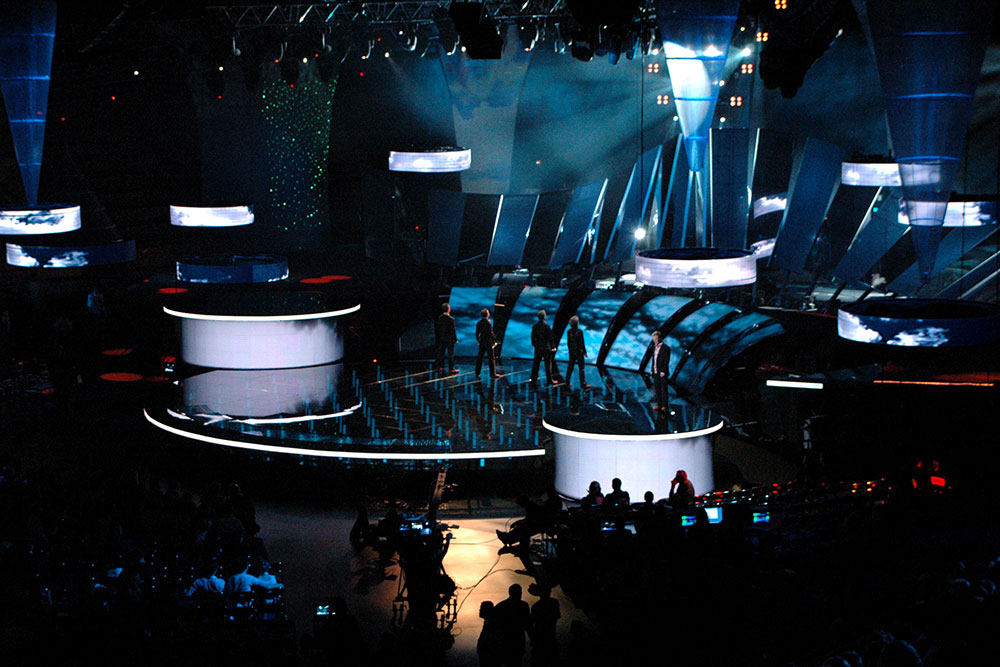 Right then. Just dashed out from the first qualifier rehearsal to give you a quite ready reckoner run down of events.

For starters, best opening ever. Lots of humour, local flavour and silliness. Me like lots, but I won’t spoil it for you all.

Hosts – a little wooden, but fine. She better than him, but he actually knows what the words he’s saying mean.

Austria
No surprises here. Much what they’ve been doing all week in their alpine Latino stylee.

Lithuania
Strongest performance of the week. She appears to be wearing nought much else than a white chamois leather. Quite liked, but may struggle.

Moldova
Oh yes. Boonika does the business. Monster reaction in the hall too. Can’t see this not qualifying.

Latvia
Little boys lost. The sign language looks even sillier close up. (We were second row, left of stage, by the way).

Monaco
Gentle and powerful at the same time. A stunning orangey frock and a reet spine tingler. Best of the ballads today.

Israel
Lots of white going on. Adequately performed but I feel we’re losing this one.

Belarus
Monster buckets of pomp. This year’s “we’ve only got to turn up to win it – in our heads” candidate. Lots of baroque costume whipping off and big frills. Very, very silly, might just scrape through.

Netherlands
Went down hugely – particularly the big finish. Don’t like it a whole bunch, but I can’t knock its quality.

Iceland
She’s wearing a funny little red riding hood outfit, and the girls do all sorts of thrusty things in tight bronze pants that made it a bonus sitting near the front (well, for us grubby hets, at least). Borderline qualifier, but most enjoyable all the same.

Belgium
Doomed like a leaky boat in a storm. He looks so plastic you’d think someone just got him out of the box.

Estonia
Actually beginning to look half decent. Lots of bouncy fun that the crowd lapped up.

Norway
The big winner in the hall. Their reprise got a huge holler of love. You can’t knock an old pro, particularly when they’ve done their homework and ties a bright orange flag around their mike stand. You’ll be seeing this Saturday, or something seriously odd has happened.

Romania
Third big changeover in a row, and this one didn’t quite make it in time. Expect to see a long shot of the crowd and the stage for about 15 seconds after the postcard. The metal bashing looks great too. Quite popular in the hall, but lots of laughing too.

Hungary
The second the fella started leaping about the punters went potty. They’ll like it out this way, and that should get it enough voting bucks to carry it through.

Macedonia
A few more drums on stage than last time, but he does lumber around like a journeyman heavyweight. Will have to rely on the neighbours to get through.

Andorra
Not actually looking too bad. Quite nice antiquey looking fabrics on the big frocks, and it sounded pretty massive in the hall. Might still struggle though.

Switzerland
The first time this has looked half decent all week. All white outfits which appeared to be giving off smoke non a couple of occasions. Were they on fire? Oh, and some magical fireworks that appeared from nowhere too. Looking more likely now.

Croatia
Can’t make my mind up about this one. It’s still a passionate, well sung swaying about tune, but that gurt buffoon with the funny red bits in his hair kinda detracts from the passion. The lad himself is wearing the regulation nasty Croatian suit, too.

Ireland
Take back what I said about Portugal in the frocky horror stakes, cos what the heck have they put poor Donna in? Not flattering from any angle, it’s all black shiny and figure mashing gold bits. Joe, of course, still rocks. Moderately popular in the hall.

Slovenia
The song that’s grown on me as the week goes on just got better. She seems to have developed 15 years of hair growth in a couple of days, but this is so passionately built and performed that it deserves to get through – although I have a nasty feeling it won’t.

Denmark
Well, the Danes will like it. He’s shuffling about gurning like a chimp and adding absolutely nothing to the song at all.Possible contender for last. (You go and watch it get through now!)

Poland
The only song that should end the contest. Lots of gypsy high campery, skirt waving and hat chucking. The kids loved it and so should the rest of Europe.

All of which means I think about 18 songs have qualified!

The interval act looks pretty stunning, but we only saw half of it, and the envelope lark is much like last year – only with more flowers.

Hope that’ll do ya kids,

Hacksaw of the East