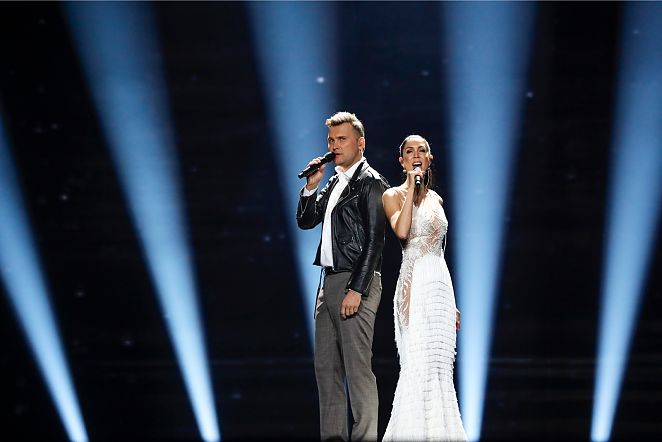 It seems that the delegations are limiting what run-throughs the press centre sees today (can’t think why eh Jacques…) because again it seems that we have been missing a couple.

Sadly, it has to be said, on the viewings we did get through the monitors, it looked like Koit and Laura were singing two separate songs, and competing like Macedonian children at JESC. Seriously though, it is very laboured and forced. It’s supposed to be a song about lovers that have split and who might rediscover passion, but they never once look lovingly into each other’s eyes in a way that suggests they have been together once. Indeed they have no eye contact at all apart from a bit at the end. Couple that with the fact that Laura is having to wear the transmitter for her radio mic on her wrist for now (which looks hideous and thankfully, it won’t be like that on the night) and ‘Verona’ comes across as woeful.

Yes, thats right, WOEFUL. It looks shoddy, ill-prepared (Koit couldn’t even hit his marks – three times in a row). The staging is ill-conceived, and almost conceited in its approach. Like they’re saying, ‘We’ve been here before, we know what to do.’ It comes across as very much the wrong side of smarmy, as if they haven’t listened to the feedback we gave 12 months ago about Juri.

On paper this is a f*cking good song, and had finalist and top five contender written all the way through it. Unless something changes AND QUICK (or at least gets tidied up and practiced), it will sink without trace … and it doesn’t deserve that.