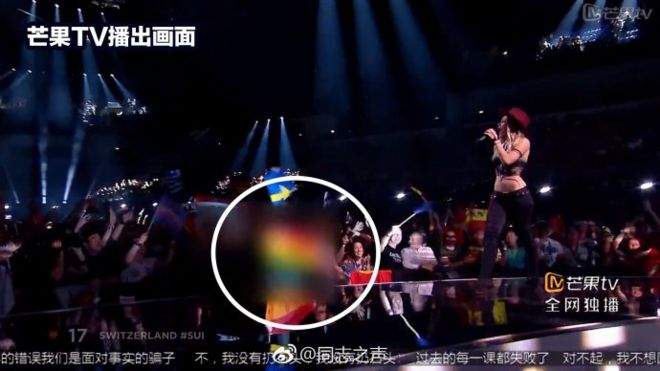 Mango TV – one of China’s most popular TV channels – came under fire  on social media for  blurring rainbow flags and censoring tattoos. They also decided not to air performances by Ireland or Albania. Overnight, a reworked version of the show was made available with Albania added back in, although there is much blurring.

Shortly before tonight’s semi-final, the EBU issued a statement:

“On the 9th of May, Chinese broadcaster Mango TV broadcast the first Semi-Final of the 2018 Eurovision Song Contest live but two performances were censored. This is not in line with the EBU’s values of universality and inclusivity and our proud tradition of celebrating diversity through music. It is with regret that we will therefore immediately be terminating our partnership with the broadcaster and they will not be permitted to broadcast the second Semi-Final or the Grand Final.”

Hunan – the parent company of Mango TV – issued their own statement claiming to be unaware of the edits made to the broadcast. They first purchased the rights to broadcast Eurovision in China in 2016, and have been key in discussions around plans for an Asian spin-off Contest.

The Chinese authorities recently moved to restrict the posting of LGBT content on social media, and in 2016 the authorities banned depictions of gay people on television.

Neither Mango TV nor China’s TV and radio regulator have so far responded to requests for comment.

Image Credits: The Voice of Homosexuality.

[…] was tipped to crash and burn on Tuesday, but then something changed. For one thing, a Chinese TV company cut him from their relay – supposedly because he features two gay boys dancing a love story – and the press picked up on it. […]

It's all about the hashtag - OnEurope

[…] Knowing your market is one thing, but playing to it is another. Two gay dancers join Irish singer Ryan O'Shaugnessy and enact the end of love and its reawakening. It consequently warmed many a cockle – though not in China where the song was cut from the show. […]