Following a local liquor tasting incident, Mr Phil took to his bed this morning – or rather demanded some respite – and so, for the first part of the day, and his shoes were amply filled by Monty of this parish. Here’s a quick taster for each rehearsal review, and a link if you’d like more – including the officially sanctioned video (other fancams are available).

My only concern about this is that Sevak might be looking and sounding a little too angry, and against a mostly dark backdrop its moodiness may be misinterpreted.

She’s sounding great, and making good use of the stage, giving sass and attitude galore. The spot uplighters around Stee on the drums are a simple but effective framing device.

It’s not the staging, which has frustrated some people, it’s the song. It’s just not strong enough. I get that it’s probably Ireland’s best entry in ages, but RTE just still hasn’t got this gig sussed.

Eleni was supported by a troop of screaming Greek and Cypriot fans, yelling their adoration for her throughout the whole song. It’s good, and extremely well-performed.

Everyone will agree this has instant appeal and charm, and his three minutes on stage do create something very engaging, but most will also agree this is rubbish.

I think there’s a little too much going on in this that it begins to make you suspicious of what they’re trying to distract you from.

The women are wearing a new black cape-y thing over the white dresses, but it’s not hiding the fact there’s some superfluous striding in this that’s not really quite gelling.

Listen up, I’m only going to say this once: this isn’t out of contention for qualification.

It’s almost as though you can see the guys counting to eight in their heads as they move around the stage.

And then it was back to closed first rehearsals – the ‘Big Five’ and host nation Portugal took to the stage for their first run-through to sort camera angles, lighting cues and props.

It’s very simply presented, Claudia alone in a long, sheer, cream shift, her pink hair standing out. Out of the shadows, Isaura appears as a dark contrast.

When the lighting cues are put into effect tomorrow, we will know a whole lot more. At the moment, it’s a decent, competent song. But it’s no secret the UK isn’t going to win this year.

For all it’s saccharine ingredients, I adore this song, even though I should hate it based on it’s make-up. They manage to get just the right amount of sweet tenderness. At least they don’t look like they’re about to jump each other given a slice of a chance.

Well considering this is a song about the death of his father, Michael has made this sound like a three-minute rage at him for leaving.

It’s like the days of the Ceefax subtitles only they’ve gone hi-tech and polyglot. The intention is to make the song more penetrable for non-Italian speakers (perhaps a tip garnered from last year’s entry by Franceco Gabbani?) but if anything, they’re too distracting. 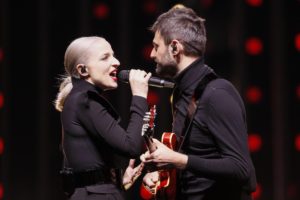 It’s vocally sound, but is it visually just a little too plain? Will the message get across? There’s plenty of headline fodder for the big guns of Europe’s press if they want to get the message out that way, an approach that worked for Jamala, and this taps even more pertinently into the social discourse of modern Europe, with a controversial topic.

Eurovision 2018 - It was the last day of rehearsals - OnEurope