It’s been a busy few days in Tel Aviv, and we’ve had our ears to the ground trying to pick up on anything you might not hear through official sources.

Green is the colour

Spare a thought for Conan Osíris who failed to make the grand final. Word is the Portuguese delegation were already unhappy after their second rehearsal. Conan barely hid his irritation in a fan site interview. A list of changes to camera shots had been ignored. They scored an extra (closed) rehearsal on Thursday evening. What they couldn’t change though was their on-stage clobber. The on-stage talent was apparently not happy, but having signed a binding contract with the designer, they were stuck with it.

Zala Kralj and Gašper Šantl might come across as bundles of fun on the Eurovision stage, but it’s all an act. Away from the bright lights, they’re a miserable pair. During the post-qualification press conference, Gašper labeled interviewer questions ‘boring’, while Zala complained about the air conditioning. It was down to Swedish/Estonian singer Victor Crone to throw shade on the Slovenian sulk with a round of applause for those working hard to report on the contest.

Sister my sister … my arse 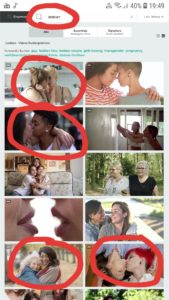 If your song is about female empowerment, what might be a great way to engage with fans. Ask for their photos to use as a backdrop to your act and create a powerful message, or go to a stock photo site and search ‘lesbian’. The German approach seen at the first rehearsal smacked of last minute. Thankfully someone listened and by the time S!sters (not related in any way) took to the stage for a second try, the backdrop had changed.

All is not well in the Moldovan camp. There were mutterings at the orange carpet launch, when sand/snow/background artist Kseniya Simonova appeared to have decided to upstage ‘Stay’ singer Anna Odobescu. 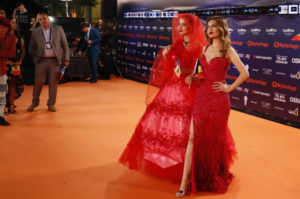 Simonova posted a grumpy faced photo, noting: ‘Look at my face. Better to keep silence.’ And of course, she had no intention of doing so. ‘How it was shot today is horrible … They killed our performance today … they just destroyed our show! I am very angry. I don’t know what they will show you. Dare to Dream? Not in our case. Kill the Dream is what I call it.’ Anna, meanwhile, maintained a dignified silence.

There’s been much chatter about the contract signed at the very last minute) by Madonna’s people to allow her to  perform at Saturday’s grand final. The Times of Israel claim Eurovision hard man Jon-Ola Sand finally lost his rag with the 2019 support act and banned Ms Cicconne from the venue until ink touched paper. A Wednesday morning stare-off followed with Sand blinking first after Madge had her people tell his people she would cancel her three-song performance.