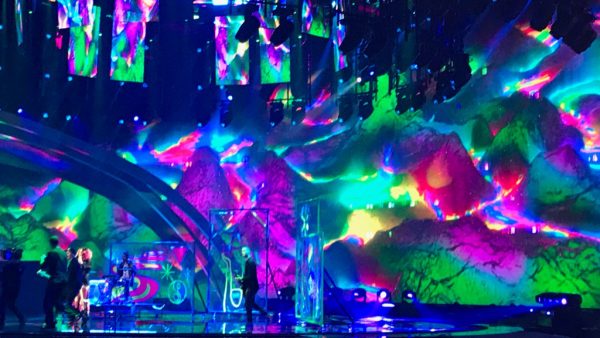 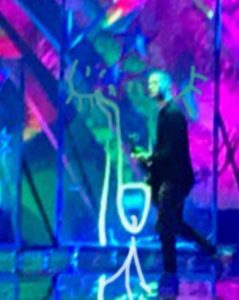 Being a technical god is fraught with issues – I missed her last run through but thankfully she came back and had another go.

Triana Park and their trance are possibly the most visual arresting thing that I have seen today. A lead singer with dyed-red hair and a thrasher t shirt and neon effects, which are OK until you see the massive neon penis in the background.

I then can’t take the song seriously. It might not pass the rules committee and there will be objections along the line of it being a family show …

Performance-wise, however, it’s a bit all over the place with very good camera shots juxtaposed with said lead singer thrusting and gyrating and the two boys gaining camera time (by pretending to hit their drum kit and play the guitar).

But it’s the kind of thing that the kids – and indeed most of this press center – likes … I am clearly in a minority, but it’s not about what I like, it’s about what they like.

I’m not watching the rehearsals, just following some sites(this one included) so I’ll try and sum up the last 2 days:

Sweden – MelodiFestival performance, so you know what to expect, however they decided not to have backing vocals and it seems to be a bit risky.

Georgia – Good voice, not so good song.Staging is dull.

Australia – He is not the New Messiah, though some think he is.

Albania – Was flat, which is a surprise when you listen to the music video.

Montenegro – We were expecting camp but not that camp.

Finland – classy and coming after the camp that is Montenegro, emphasize this even more.

Portugal – it’s not the same song when his sister is singing it, even though she wrote the song.

Greece – People out there were expecting a stage show to remember, but at this moment it’s more MEH than WOW

Poland – See Georgia above and no one seem to understand what Freedom has to do with this song.

Moldova – Fun and energetic. Surprise of the day. The staging manage to hide the fact that this is quite a monotonic and repetitive song.

Iceland – Her performance is less aggressive than the one on the NF but she seems to be very lonely on stage.

Cyprus – Remember, you are a singer in a song contest not an acrobat in a cirques or a Olympic medal holder by gymnastic.

Armenia – Apparently a fabulous staging covering the fact that the song is not that good.That’s said, there are a lot of people who think this actually a very good song and the staging making it even better. Sometime people can be deaf or/and blind.

Slovenia – Old fashioned ballad, but he sell the song well, as long as he manage to hit the right notes.

Latvia – Everyone is talking about the neon penis, they are right, it’s there.Beside that it’s quite a messy staging.