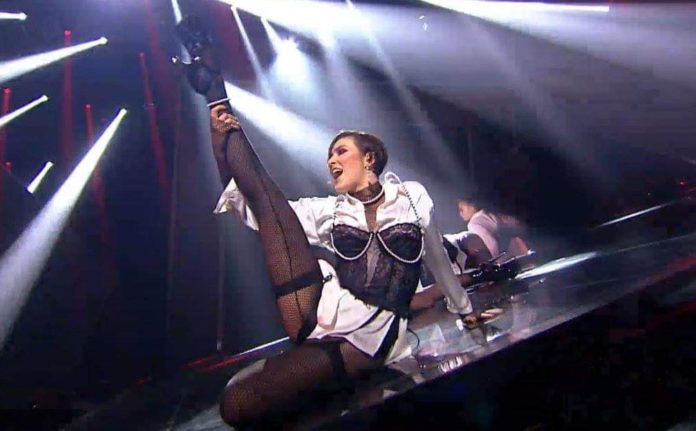 On Saturday evening, Maruv triumphed at the Ukrainian Vidbir contest, earning first refusal on a place at the 2019 Eurovision Song Contest. The glitter barely settled and fandom rumbled with cries of heavy-handed regulation.

The row continued today and ended with an announcement from UA:PBC that Maruv will not now represent Ukraine in Tel Aviv.

It was on social media where rumours first spread that Maruv’s Eurovision prize was in doubt. Despite having a sizeable Russian fan base, she was asked to cancel a string of planned promotional appearances.

Maruv today indicated she was ready to do this, but shortly afterwards, First Deputy Prime Minister Vyacheslav Kyrylenko took to Twitter to claim earlier Russian performances should disqualify the singer. A statement issued by UA:PBC slammed political interference in what was meant to be a song contest.

Vidbir participants were told in advance they would need to sign a ‘participation contract’. The agreement would oblige the winner to cancel other promotional appearances and focus fully on Eurovision. They would assume the role of ‘cultural ambassador’.

With taxpayer money tight, UA:PBC made it clear it would only cover entry fees and travel costs for on stage talent. There would be no money for extra staging effects, entourage travel or promotional appearances.

The Ukrainian ‘participation contract’ also stressed Eurovision Song Contest rules. “The stage performance shall be identical in all second Dress Rehearsals and during the live Shows.” Maruv would not be allowed – as she put it – to perform impromptu dance moves on the big night.

In advance, each Vidbir act pledged its law-abiding loyalty to Ukraine. They confirmed no time spent in annexed Crimea. Not asking this question would have shot hypocritical holes in a 2017 Ukrainian ban on Julia Samoylova when picked to sing for Russia.

Much of what features in the UA:PBC contract reflects agreements imposed by other broadcasters.

There was, however, no mention of contestants being ineligible if they had performed in Russia. Indeed Maruv was asked to take part after another singer withdrew from Vidbir. Her shows in Russia were no secret.

The storm blew up after the Saturday evening show when – with an eye on upcoming elections – certain politicians hijacked Vidbir to further their own causes.

In 2017, UA:PBC incurred the wrath of the EBU following criticism of how they hosted the Kiev contest. As such, the organisation remains under close scrutiny.

This year, there have been pledges to tighten security and avoid embarrassing political protests in Tel Aviv. Last year SuRie was interrupted mid-song as she performed for the UK.

Despite this, the EBU rightly distances itself from song selection. It polices eligibility criteria, but entrusts song selection to broadcasters. Most explicitly reserve the right to reject or accept the winner of any public selection show.

The broadcaster issued a statement this evening to confirm it is considering who would be best placed to represent Ukraine at the 2019 Eurovision Song Contest. The runner-up Freedom Jazz have already said no (they performed in Moscow as recently as June 2018) as has third-place act Kazka.

Update
To read about how Ukraine has since announced its withdrawal from the contest, go here.

[…] UpdateMaruv won’t be performing in Kiev after all. For the full story on this, have a look here. […]

[…] out actual money on a focus group. Add top which, the last day has brought good news. There's no longer another song using more or less the same […]