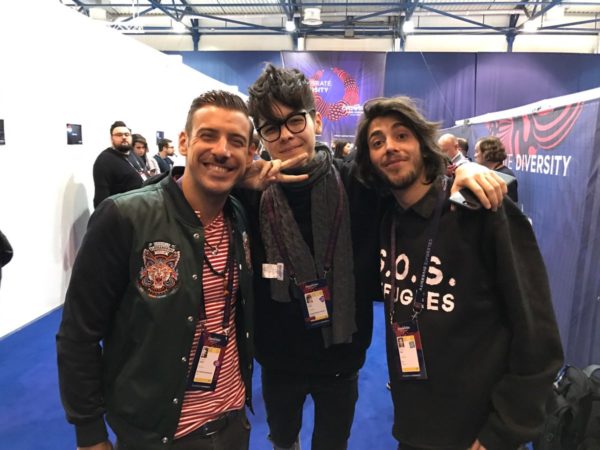 With just a few hours to go before the 62nd Eurovision Song Contest, money is being placed on Italy and Portugal. Oddschecker suggests a three-horse race with Bulgaria also attracting sizeable bets. For the first time in a few years, the UK isn’t being dismissed out of hand.

OK, so it’s not so much ‘one to watch’ in terms of winning, but it looks set to give the BBC it’s best result in some time.

The more predictable UK newspaper coverage focuses on whether Brexit will impact the UK result. Repulsive right-wing thought-void The Daily Mail leads with a snappy headline that reads: “How the Brexit vote could spell nul points for our Eurovision Song Contest hopeful Lucie Jones thanks to hostility from music fans across the Continent.” It goes on to directly quote ‘fans’ of the contest expressing anti-British sentiment. It’s a deeply unedifying piece of yellow journalism. I’m calling fake news.

Tomorrow’s chip wrapper The Daily Star gives unwarranted airtime to the perimenopausal mumblings of former UK winner Katrina Leskanich. She called the UK national selection “a bunch of X Factor rejects,” adding that it felt like “a colossal waste of money not to take it a bit more seriously, and try a little harder.” A BBC spokesperson swiftly made a U-turn on her behalf. They said: “She ardently supports the work that the BBC does for Eurovision and believes that Lucie Jones is an outstanding Eurovision entry for the UK this year.” Katrina will read out the UK votes, remember to throw something at your screen.

The Birmingham Evening Mail might be getting ahead of itself when it suggests the city is ready to welcome back the contest after twenty years.

Who would have thought that it would be Sky News that gets things bang on when it talks about: “A dashing Italian with a dancing gorilla and a dim view of the world, a softly-spoken Portuguese with a song-writing sister and a pony-tail, and a 17-year-old Bulgarian set to steal Russian votes.”

Francesco Gabbani and his dancing gorilla have attracted interest from British picture editors. Sadly many tend to frame it as a ‘dancing gorilla’ straight from the Eurovision playbook.

Sensing that Eurovision viewers have the attention span of an over-sugared toddler, Gabbani has appeared anxious to stress his song – Occidentali’s Karma – is no novelty entry.

Previously loyal fan sites have been falling over themselves to find reasons for the song to fail – suggesting he looks tired or nervous.

Despite what looks like a fake news campaign to get Bulgarian Kristian Kostov disqualified from the contest, his song romped through to the final. Beautiful Mess is widely tipped to hoover up votes across Europe. With no Russian entry, the Moscow-based singer could easily be seen as the next best thing – not that he may want that dubious accolade.

Some Russian bloggers insist the 17-year-old wants to win so he can take the trophy back to Moscow and smash it in front of the cameras. More fake news.

Eurovision love seems universal for Salvador Sobral. After playing the song on his Saturday morning radio show today UK commentator Graham Norton commented that it may not sound like a winner when you hear it cold, but the performance will blow viewers away.

The Portuguese singer has literally charmed people with Amar Pelos Dois and he’s now seen as Gabbani’s main competition. Yesterday afternoon, he toppled bookie favourite Gabbani from the top of the betting table.

There are other acts in the running. As always, it’s only a fool who would say Sweden has no chance. Conspiracy theories abound after they got a supposedly plum position in the running order.

Belgian singer Blanche remains a rank outsider with ‘City Lights’ after more assured performances at the last two rehearsals. In an interview with French newspaper Le Figaro, she admitted she felt under more stress to get through the semi-finals than to win tonight.

See you later for my live blog!