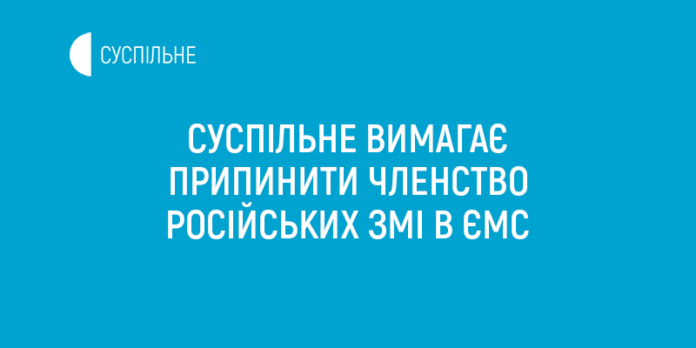 With the political situation constantly changing in Ukraine, there has been a call for the European Broadcasting Union (EBU) to expel Russia from the upcoming edition of the Eurovision Song Contest.

The Chair of Ukrainian public broadcaster Suspline – Mykola Chernotytsky has issued a direct appeal to EBU President Delphine Ernotte Cunci. In a letter published online, he cited a breach of EBU rules on political neutrality, noting that Russian Channel One and VGTRK have acted as ‘a mouthpiece for the Kremlin’ since 2014, transmitting government-financed political propaganda and suppressing journalistic integrity.

In June 2021, the EBU revoked membership of broadcaster BRTC in a row over the suppression of media freedom in Belarus.

Chernotytsky notes: “Russia’s exclusion from (the Eurovision Song Contest) will be a powerful response by the international community of public broadcasters to the unacceptable aggressive and illegal actions of the Russian Federation and support for the country’s state broadcasters’ hostile policy of aggression.”

Unlike the Union of European Football Associations (UEFA), who called an extraordinary meeting of the Executive Committee for Friday, the EBU rushed out an emailed response to Chernotytsky, stressing the purpose of the competition is to unite nations and celebrate diversification through music. It added that for now they plan to welcome both countries in May.

The Eurovision Song Contest’s founding stemmed from a desire to promote cooperation between European countries in the years following the Second World War. Active EBU members (as well as invited associate members) are eligible to compete.

A history of disagreement

In recent years, the Contest has become something of a highly visible melting pot for disputes between Russia and Ukraine.

The biggest scandal erupted in 2016 when Crimean Tatar, Jamala won the Contest with her song “1944” which deals with Stalin, Crimea and claims of ethnic cleansing. The following year, the EBU disqualified Russia following a dispute over Eurovision entrant, Julia Samoylova, who was not permitted to travel to Kyiv to take part in the show.

In 2019, pop singer Maruv pulled out of the contest after the Ukrainian Broadcasting Council demanded, among other things, that she refrain from giving concerts in Russia. Just last week, Alina Pash was embroiled in arguments about travel to annexed Crimea, causing her to withdraw from representing Ukraine at the 2022 Eurovision Song Contest, handing the job to Vidbir runners-up The Kalush Orchestra.

OnEurope contacted the EBU for a response.