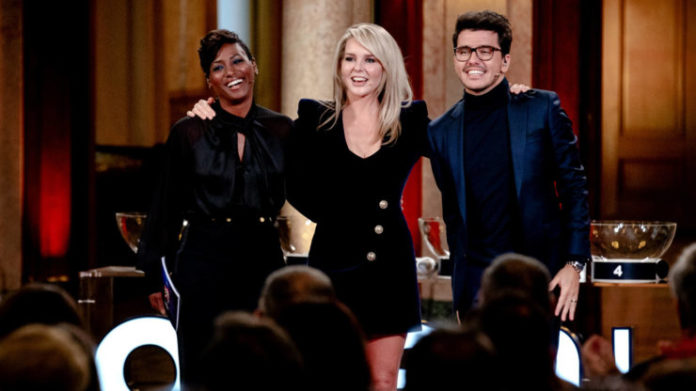 It’s time to start wild speculation based on nothing more than a (partial) running order. Today in Rotterdam, various Eurovisionaries gathered and the draw took place to decide who sings when at the 2020 Eurovision Song Contest.

35 of the 41 competing countries will fight it out for a place in the Grand Final that takes place on Saturday, 16 May. They do this by singing for votes in two semifinals – one on 12 May, one on 14 May. Ten entries from each heat will make the final cut. Everything happens at the Ahoy in Rotterdam.

2020 hosts Jan Smit, Edsilia Rombley and Chantal Janzen oversaw today’s draw. Here’s who gets to perform when (in alphabetical order).

France, Germany, Italy, Spain, the United Kingdom (the ‘Big Five’) and host country, the Netherlands, automatically qualify for the final, however they are each required to broadcast and vote in one of the Semi-Finals.

Germany, Italy and the Netherlands get to vote in the Tuesday show. France, Spain and the United Kingdom vote on Thursday.