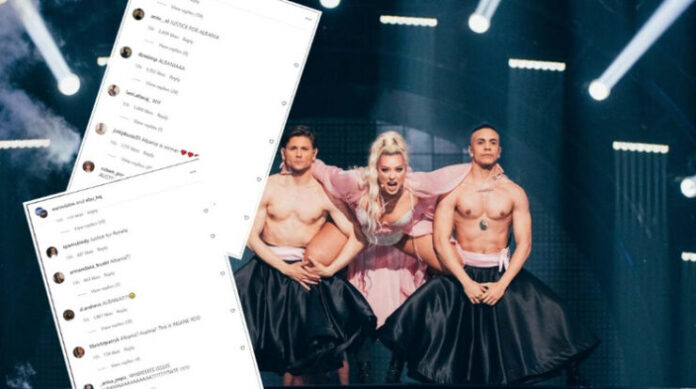 Seven songs bit the Eurovision 2022 dust last night, and all eyes were on the only corner where drama might lurk – the one where a bad-tempered Albanian delegation set up camp.

A leading Albanian news site proclaimed that ‘foreigners are cross’ (though that might be Google translate being polite) about the fact ‘we wuz robbed’. And why do they believe this – because ‘Sekret’ was fifth most-viewed YouTube video. And as anyone who has ever watched 80s home video blooper shows will tell you, people ain’t watching for the good stuff. There’s a reason why cars slow down to rubberneck crashes. Oh, and the other obvious bit about Albania should have qualified – polls.

What was more of a worry was the number of (mostly male) fans lining up to ‘slut shame’ Ronela, deciding how they feel a woman should act. Those who judge a woman by such standards, keep alive toxic, outdated ideas.

Even if i was in the final i would be last!i know! But the amount of love I received is enormous! I won Eurovision cause i won the crowd! And the crowd is always right! LOVE U @ Turin, Italy https://t.co/gtr0AvqeaG

The curse of going second remains a thing. Even though the curse of acting like you’re performing on Kid’s TV with a tediously repetitive dirge laced with schoolboy humour might also be a thing.

Elsewhere, the more sober news websites seized on how Ukraine is in the Eurovision Song Contest 2022 grand final. As if there were any doubt. The bookmakers have them pegged to win – as has been the case for some time.

On a related note, news that Filip Kirkorov took a helicopter from Monaco to join the Greek delegation has gone down like a cup of cold sick in many parts of the Eurovision world. The pro-Putin performer is persona non gratis in some countries and any association with his stock isn’t a good look.

Obviously the world and his boyfriend have exclusive access to the full public and jury results and know for a fact that Norway/Ukraine/Netherlands/Iceland won. The OnEurope response begins with F and ends in ake. In answer to the Reddit question ‘do you think those leaked results are real or created by salty Swizz haters and Albanian fans’ the answer is YES.

Short summary today as I need to get into make-up to LIVEBLOG the rehearsal this afternoon – what do you mean nobody will be looking at me? Rude!