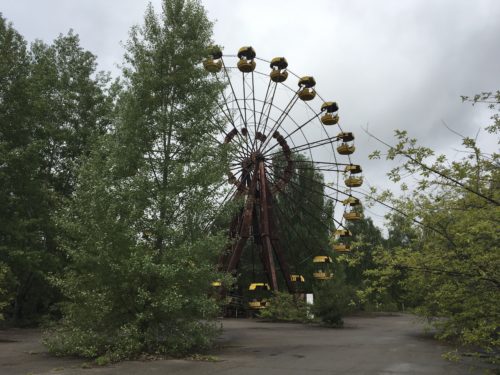 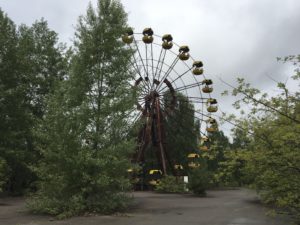 Good morning OnEuropeans! I’ve not been here much in the last couple of days. The main reason being I – *gasp!* – LEFT the bubble! That’s right. That Phil and I and a whole load of other lovelies of this bubble-parish had a day trip to Chernobyl. Not the cheeriest of outings, it has to be said: it’s no Skegness sea front with a quart of winkles, but it was an intriguing day trip.

Chernobyl loomed over us (quite literally) in the 80’s, in the wake of the world’s worst nuclear disaster – and the stories of evacuations and impending doom still feels fresh in the memory. I’d seen the possibilities to travel there before, and it always looked fascinating. I wasn’t wrong; it was a day at times harrowing and heartbreaking, but with the passage of time, and the effects of nature creeping over the eerily abandoned town of Pripyat, never less than fascinating, with a history lesson into the impacts of the catastrophe. A highly recommended trip if you ever get the chance. 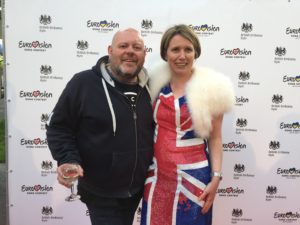 Then it was back into the bubble, and how! A glorious reception at the UK Embassy with our frankly fabulous Ambassador Judith Gough. I met Judith earlier this year on a pre-Eurovision trip and was impressed by her team’s work with the local LGBT communities, as well as her enthusiasm to promote cultural links with the UK in Ukraine. She’s also a Eurovision fan, as well as a bit of a hoot, and was dressed for the occasion in her Union Jack dress. The party was open air, which would have been wonderful with the weekend’s weather, but I’m afraid to say we had SNOW in Ukraine yesterday, so it was something of a change as we huddled under heaters to keep warm. Had Slavko from Montenegro been there he’d have frozen his ever-displayed nipples off. 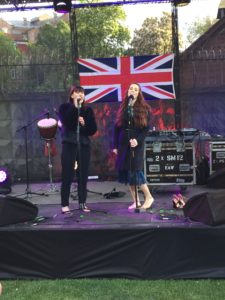 But the weather couldn’t dampen our enthusiasm for our girl, Lucie Jones, who gave another great performance, including an exclusive duet with our songwriter, and Eurovision winner, Emilie de Forest. What a lovely evening, I can’t thank thank our hosts here in Kyiv enough.

From there to the EuroClub, via dinner (vegetarian burger, readers, although actually some finely grilled vegetables in a hollowed out crusty bap! An unusual but tasty twist, livened up with some zingy Sriracha). The international OGAE fan network teamed up with Wiwibloggs to bring a great party with plenty of guest artistes. It closed with a surprise performance by 2015 winner Måns Zelmerlöw (well, less of a surprise, as we’d seen him at the Nordic Party so knew he was in town, but unbilled nonetheless), and some busted moves in the dance floor until far too late. You know you’re at Eurovision when you say ‘good evening’ to the hotel staff on arriving home and they reply ‘good morning’ back…

I’m out of the bubble for a while more today, but going to the OGAE UK party before tonight’s second semi final, which I’m hitherto lax in calling. I’ll pop a prediction through for y’all later.