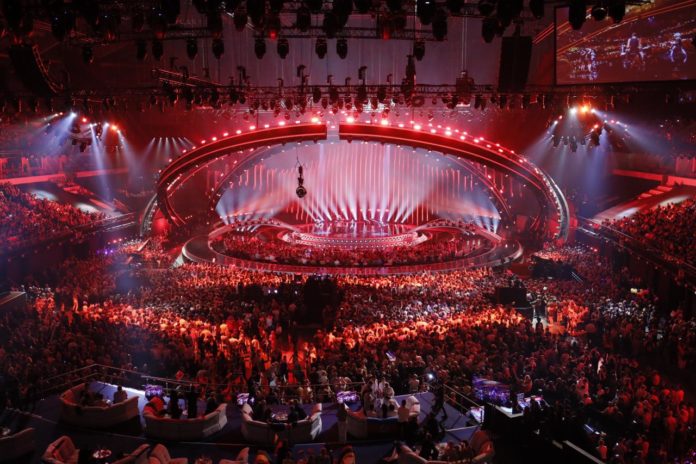 Bom dia, Oneuropeans! Tudo bem? Well, it’s here. Eurovision Final Day. Even with over two weeks in this beautiful city, it feels like it’s come around so quickly.

I’ve not managed to make it in to the press centre much this week at all, due to an especially full dance card, and to be honest the various receptions and delegation parties we would usually report so enthusiastically for you have been painfully thin on the ground this year. 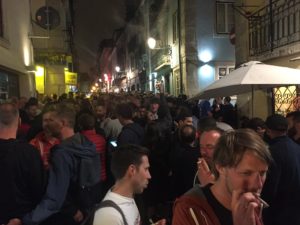 This city is, though, abuzz! I don’t think I’ve ever seen a host city so full of Eurovision fans before, and most of them are Spanish. We heard that 20,000 of them were expected to arrive this weekend, and it’s fair to say that they have. There’s a passion among the Spanish fans which is unsurpassed, and they are now one of the hungriest nations for a win. Throngs of them crowded the narrow streets of the Bairro Alto (which we’ve renamed the Bairro Saara Aalto, obvs.) last night, singing in full voice along to their entry as they played it from tiny, tinny mobile phones.

The gay bars of Lisbon’s Principal Real district are small and surrounded by residential areas, but they have been bombarded with the sheer number of fans who have travelled here this year partying until the dawn. The city’s biggest regular gay club Trumps has turned its schedule over to Eurovision and last night still featured a queue reaching down the street at 4.45am, as fans clamoured to gain entry for the last hour.

From a tourist perspective Eurovision has been enormous for Lisbon, and it’s wonderful to hear many people share the love that Jody and I have had for it for many years.

Those 20,000 Spanish fans may, however, be disappointed by their result. As we poured over the running order in the early hours of Friday morning, we saw they were singing in the ill-fated second position, from which famously no song has ever won. The peril of a producer-decided order is the criticism of where songs may be placed, and here I think they’ve thrown Spain under the bus. There’s been such huge national interest in Eurovision in Spain this year, that I think they should have been offered a better slot.

The rest of the order is cracking though, and the end of the show in particular is spectacular.

As we head out to enjoy the final pre-Contest afternoon and soak in the atmosphere of the build up there is just the one question left: who’s going to win? More than ever this year this is the simplest question to ask and the hardest to answer and I’m so grateful for it being so. The bookies’ predictions have shifted dramatically: Cyprus now leading (Cyprus!); Israel losing then regaining ground in second; Ireland in third (Ireland!); and the top 5 rounded out by France and Sweden. Norway has plunged – a move I hope is mirrored this evening. UK, sadly, is nowhere.

But are the bookies to be believed? If we’re looking outside of those predictions for dark horses to, not win, but sneak into a placed position on each-way bets then the honest, emotional integrity of Lithuania and the sheer comic, fun genius of the Moldovan staging could be ones to watch. With Russia gone the Moldovan entry (penned and bankrolled by Russian Philipp Kirkorov) is the next most patriotic vote among the ex-Soviet states, and will surely appeal to viewers in the west too.

Let’s not rule out another ‘Running Scared‘ either: Sweden is now extremely well-placed to pick up a string of 7s and 8s from everyone and take a seventh victory. Germany too has climbed the ranks, and with a simple, rousing, familiar and safe song sung mid-way is probably my hardest to predict tonight; it could be anywhere from first to last. 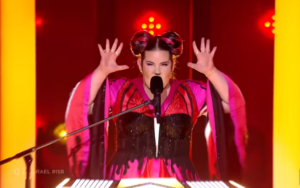 So, to nail my colours to the mast. It’s a brave or foolhardy person who does this, given what lies in wait for us ahead. Cyprus has a great chance, but I suspect some of its buzz is still in the bubble, so I’m going to stick with the song I thought would do it when I arrived: Israel. Netta has lost some momentum here among the press hounds, baying for Eleni’s ‘Fuego’, but it had so much attention coming in, has so much originality, taps the #MeToo zeitgeist and delivers a memorable, stand out performance with a great vocal. Coming on at twenty-second, it has just about the right place to usurp its competition and is divisive enough to be either the one you don’t relate to, or the one that makes you rush to pick up the phone.

Well. There you are then. Another year almost over. Thanks so much for being with us, whether that’s being entertained by the rest of the team year-round, or just for the build-up, through our Countdown series and our rehearsal blogs. Your support is much appreciated, as that Phil will no doubt tell you when he posts about our record-breaking year.

Enjoy the show, and a Fab Eurovision to you all!

I’ve not been following the contest as closely this year but here’s my prediction. You can all laugh at me tomorrow.