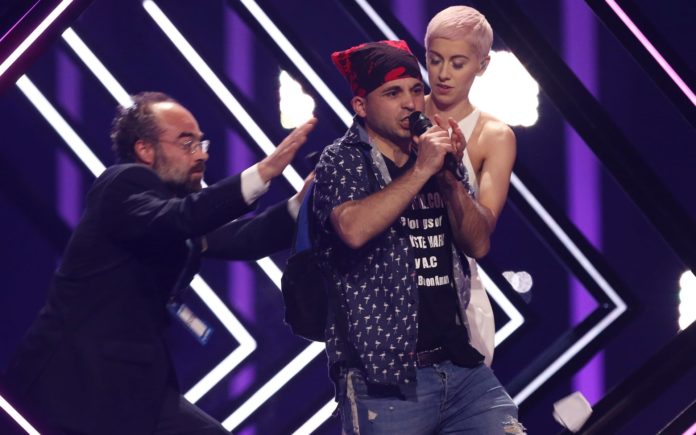 SuRie won widespread praise tonight when her Eurovision performance was interupted by a stage invader.

Midway through the song, someone rushed on stage, grabbed the microphone and screamed: “Nazis of the UK media, we demand freedom” before he was wrestled from the stage.

She clapped along and was handed another microphone, and even though she was visibly shaken, she picked up the song to huge cheers and was soon back on track, ending the song to wild applause.

An online petition launched shortly after to implore the BBC to send SuRie again next year.

The invader has now been identified as rapper, political activist and serial stage invader ‘Dr ACactivism’, who was plugging his book with a slogan on his t-shirt. He has previously interrupted several major UK awards shows.

A BBC Spokesperson said: “SuRie was offered the option to perform again by the EBU. SuRie and her team are extremely proud of her performance and have together decided that there is absolutely no reason to perform the song again.”

“The EBU released an official statement which read: “The EBU regrets a stage invasion took place during the UK performance at the Eurovision Song Contest Grand Final in Lisbon this evening. The person responsible is in police custody.

The UK ended the night in a fairly familar 24th place. And as for the wonderful SuRie …

[…] could find herself up against SuRie. Robbed of her three minutes, a petition is well on its way to 3500 signatures to have the BBC give […]