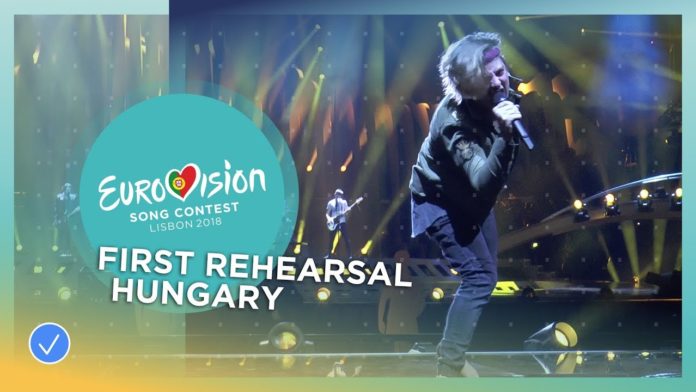 For everyone that doesn’t like this song – me included – you will have to admit after having seen AWS, that this is how you perfectly stage a song .

AWS have aimed their performance not at a television show, but for an auditorium that happens to be televised. Normally, that would fall flat but it works with the size of the stage and the shouty-ness of the song, coupled with the lead singer head-banging and running about the stage (using both bridges and screaming a lot towards the end) and many spotlights … not to mention effects that make it unsuitable for photo-sensitive epileptics.

It’s also not suitable for ‘pyro-phobes’; the Hungarians have ordered everything from the menu.

Sadly, though, it’s also not suitable for this competition. I can’t imagine your Thursday night fan crowd voting for it because “it’s not Eurovision innit”. That said, I can imagine the juries saying, “It’s a real song”.

It is a real song, by a real band doing what they do.

Will it qualify? Probably not, but it will go closer than people will think and that will scare them.

22 March – Just yesterday we were on the floor

[…] having said that (and I said it on Wednesday as well), this song knows what it is. A glorious shouty rock mess aimed at an existing fan base. There's […]