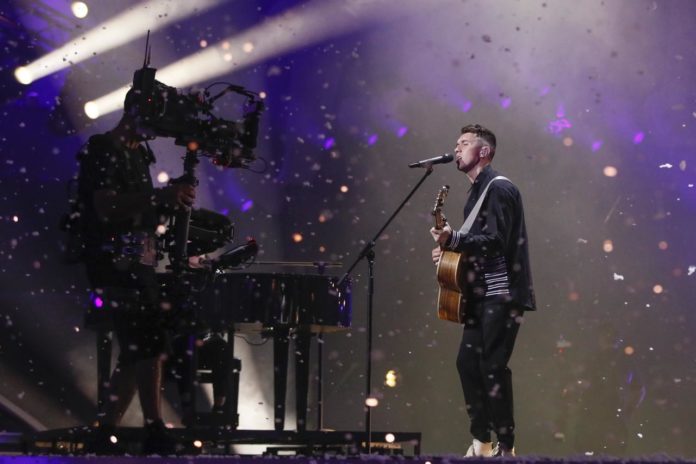 Ooh Ireland! What have you done? My favourite song of the year and you’ve tried to be too ambitious. Ryan starts well enough, looking straight into the camera and emoting. There’s a female pianist also doing vocals, and they exchange lingering looks, but I’d like to see more of Ryan connecting with the viewer at home.

The second verse starts and the two male dancers from the Irish video appear from the bridge to join Ryan on stage and dance across, around and on top of what’s supposed to be a bench but it looks like a random piece of gym equipment. There’s also a street light, presumably in an attempt to recreate the video, and herein lies the problem – you can’t recreate or do the video justice in three minutes on stage at the contest. It then starts snowing for the last chorus presumably because Dublin drizzle would be too hard to capture on camera.

I think Ireland might be in trouble now, sadly. I find the dancers distract from the melody and the emotion in this beautiful song. Three minutes is too short to attempt what has been attempted, and I suspect there won’t be enough votes next Tuesday and that is a bloody shame.