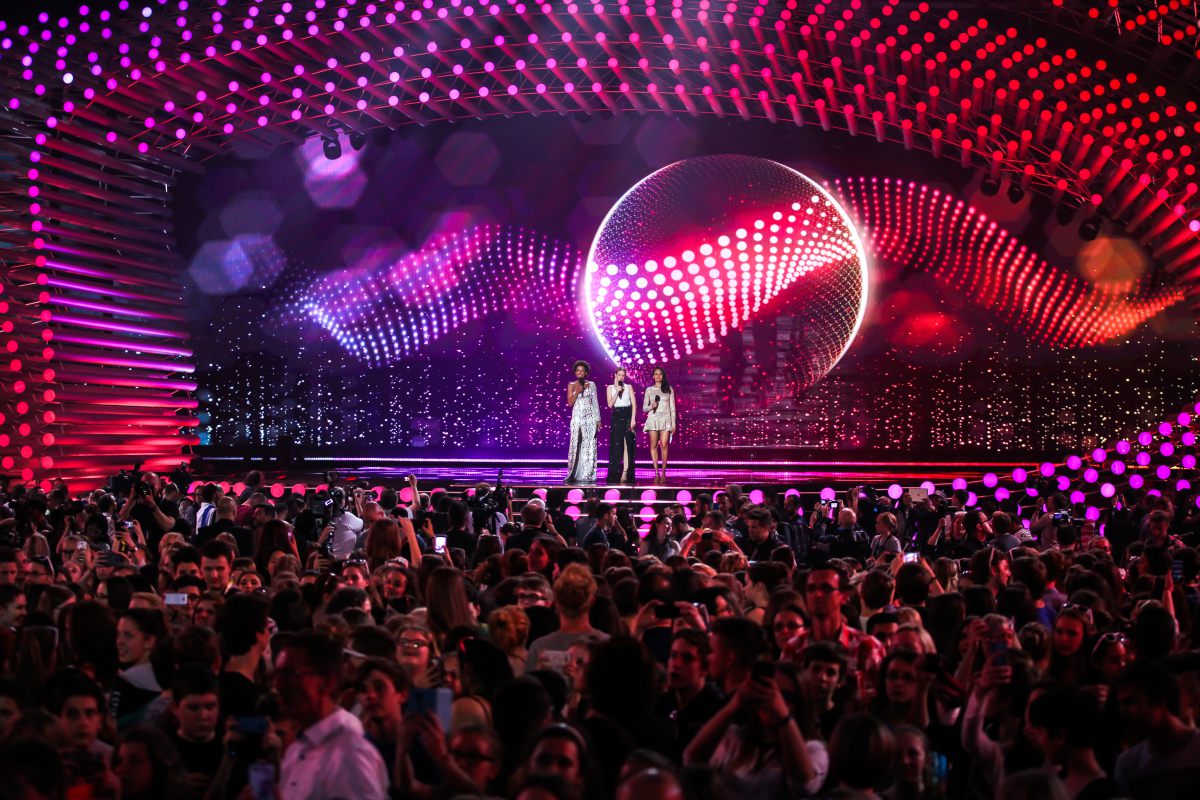 Sorry we’re late peeps – Garrett for Eurovision Ireland held us up on getting to the arena… Seriously man!

Ireland – Yeah that actually was not bad… From what we heard Molly looked and sounded ok and not, if the rumours are to be believed, suffering any after effects of her so-called “Episode” – Roy tells me she looked alright last night.

San Marino – Yeah not bad…… actually thats a lie, it was hideous.. They look scared and Michele has aged this week… I suspect this will do very badly indeed.

Montenegro. Very polished performance by Knez, as you would expect. He now, though, looks like a sweaty George Galloway and this aims at its constituency very well, not so sure about the dramatic dancing and hand movements in this but it seems to get people going!

Malta. This seems to be struggling. Reports suggest that last night’s performance was not as strong as expected and the high notes in this one are still being missed. It does looks good though on the screen but i’m fearing this one.

Bit of chat by Conchita to Molly, talking about her Donkey…..

Norway – Not that I am criticising how he sings, but Mørland sings too close to the microphone and we can’t quite see all of his face. However, I can’t sing that well so it’s nothing I can say. This, though, looks perfect and is mesmorising on stage. There is a high chance that this could well give Sweden a run for their money in this semi final. When the faux break comes, it builds and looks great on screen. Danger, this is very very dangerous.

Portugal – It might have had a 2nd run through last night due to the jury feed going down, but it won’t get a second run through in this contest. It looks messy with the swooping camera shots and it’s just not memorable enough to stick in the voters heads after they have seen another nine songs. That key change is clunky and she looks like she is fighting the wind machine rather than looking at it. Problems a plenty here… I think she’s a goner.

Czech Republic – My issue with this is not the staging but rather “Why would you vote for this?” It has very little televoting appeal here but they both have cracking voices though, but I just fear that it isn’t enough for anyone outside the “Phwoarr look at him/her” constituency. She even throws her shoes at him, but that’s not helping and can come across a bit silly. Nope, sorry.

Israel – A complete change of pace now when this comes on and its a flashback to the Eurovision’s of old. A song of dubious quality that is being performed to within an inch of its life and in this soup of ballad’s it really stands out. Nothing has changed and Nadev bounces everywhere…. It’s a breath of fresh air and should qualify well.

Latvia – and back to a clunky change of pace again. From the mentalness of Israel to the slowness of Latvia and despite my personal dislike of the song, Aminata is doing her best here. I’m strugging, though, to find out who would vote for this. It’s hardly televoter friendly but, and it’s a big but, the juries might have done her a favour here. I’m inbetween and on this performance there are too many long shots for me.

Azerbaijan – A classy performance by Elnur here. Again, perfectly staged to tell the story of his internal struggles and hell Elnur can sing this. Jury bait a plenty here and the telelvoter will be torn between this and Norway and Sweden for your televotes. This should qualify massively and Top 10 in the final i’d say.

Iceland – I sincerely hope that last night was better than this… It’s awful and looks totally too young for her. 22 going on 9 you say?? – There seems to be a lot of backing singers that are trying to help Maria on stage and boy does she need help. Considering Hera is her vocal coach, i’d ask for my money back if I was Maria and RUV!!! This is all shades of wrong and shouldn’t qualify…. much to the chagrin of people here.

More chatting with Conchita here…. Talking to Norge about her dress and Portugal about…. stuff…

Sweden – “Hej” say the presenters and again, another complete change in gear from the last song – Mans is slightly off with the backing animations but pulls it back – to be fair, i’m struggling to find things wrong with this and it will get through the semi final – my issue is if it gets through it’ll be fighting for the win definitely.

Switzerland – Song 14. Sadly just passes me by and thats a shame because it is a really good song but I feel, again, that it’s fighting for the lower places (7th-12th). I feel it just doesn’t connect like it should though.

Cyprus – I still don’t get this song. I think that it’s borderline at best but don’t be surprised if it gets through.

Slovenia – Brilliant…. Absolutely brilliant. Finally ORF have got the cameras right and this too now stands a massive chance of getting Top 5 in the final.. I worry about her dress looking like my mums net curtains but, who cares, the quality of the song works every time. Marjetka just nails it and that makes me smile.

Poland – Again, another change of key in this semi. It’s still a damn good song, but the only thing she can do is to raise her dress over her wheelchair and whilst i appreciate she is limited, it just looks a bit silly. The song is also a chorus too long to be honest as well and is borderline.

Right – That’s it….. I missed Lithuania, but I suspect it was the same as it ever was…..

Have a great evening this evening!!