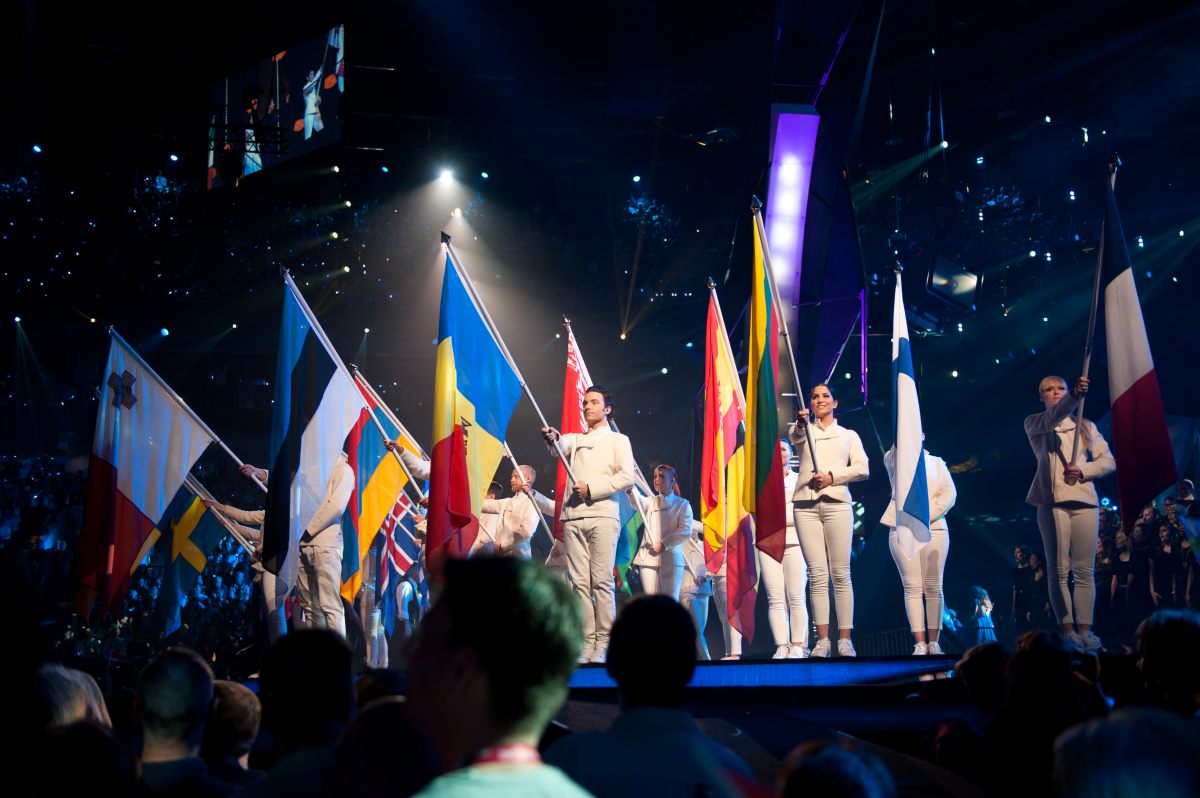 In what has become true to form for this contest, the rehersal isn’t starting on time.  This time we’re again 15 minutes late.

Judith, Stefan and Anke are in red, black and yellow respectively.  The tell us all sorts of really exciting stuff in various languages and even indulge in a bit of French rap.  And, finally, we can start woting.

Bosnia AND Herzegovina – How quirky.  A man in a geography teacher’s jacket, a woman convincingly playing a little piano and lots of foot stomping.  It’s what the world needs more of.  He’s just competent enough to get this through to the final.

Austria – Nadine starts off as the voice in the darkness.  The dry ice has gone (it looked better with it).  As in the rehearsals, she got it spot on.  And we like her cos she is ace.

Netherlands, The – I can’t wait to see the golden gardens at the sweet end of my trail.  It’s a safe song, a bit of a plodder, but in a pleasant way.  The rock angle has gone with the three nubile backing singers.  But it doesn’t really go anywhere.

Slovakia – Fragrancy comes to Eurovision with the slightly out of tune TWiiNS.  They look good and engage well with the camera, but they still need a little work on the vocals.  In their favour, as with all the other participants, they only need to get it right twice.  On this showing, we won’t be seeing Slovakia on Saturday.

I think now there should be a bit of good-natured presenter stuff while parts of Europe go to adverts.  All we have is silence before part 2. It seems that the 10 finalists from Tuesday will be in the audience tomorrow night, so our host will chat to some of them.  Next on…

Ukraine – Our first hiccup of the day when the Ukrainian playback stopped without warning.  Sand artist Cervelan is working like a demon making all sorts of intreresting shapes.  It almost takes your mind off the song, wondering how she can turn a nose into an eagle, but it’s all pleasant enough.

Moldova – Not too sure about the camera angles on this one.  They need to be a bit edgy with it, but the director seems to back out at the last minute.  It will qualify because it’s such a contrast with the songs either side of it.

Sweden – The sound seems a little off – the playback vs vocal mix isn’t right.  Did we have him smash his way out of his portable aquarium?  No.  It’s still borderline for me.

Cyprus – We’re missing the dry ice that hides the boots of Mylordos and his chums.  They need to sort out some more camera angles too, as the interaction between him and the girl at the end of the catwalk is very clunky.

We now get reminded about how to vote.  Dial the number or send the SMS.  But you can’t vote for your own country.

Bulgaria – Our little rock chick is next on stage.  Her support band reminds me of Vanilla Ninja.  Vocally it’s OK and the press centre masses seem to like it.  I’m still not sure whether we’ll see it on stage after tomorrow night.

FYR Macedonia – This guy has never played a guitar in his life, and we’re told he’s using it to hide himself.  Who needs a security blanket when you have a fingerboard and sound box?  It moves along well but he thinks he’s the sainted Tose Proeski.  No FYRoM this year methinks.

Israel – Dana appears to be emulating her heroes Morecambe & Wise.  She’s singing all the right notes, but not in the right order.  We’ve all done it, but most of us never on a Eurovision stage.

Slovenia – Imagine Dana with talent, a decent voice and looks to match – in other words, someone that sounds nothing like Dana – and you have the fair Maja.  This works very well and she smoulders away nicely.  A cert for Saturday.

Romania – A very instant song from, so we’re told, the best karaoke singer in Romania.  He also comes from Newcastle, which is next to Scotland (his words, not the resistance’s).  It should qualify, and it’s immediately before an ad break.

Our next treat is Eurovision fans singing their favourite songs.  Pure TV gold if you have the stomach to spot a certain Johnny Logan.

Estonia – Turning a piece of silk into a came is worth a place in the final in my book.  Some of the vocals are a bit off, but that seems to be the fault of the sound mixing, rather than Getter.  It gets a little busy, and one of the dancers didn’t quite get his back flip right.  Still a probable qualifier.

Belarus – What Eurovision needs is more dulcimers – and cheese of course.  This has the former, but not the latter.  It also has an offkey performer.  She comes from the school of badly-sung English.  Either that or there is genuinely a cabbage in her bed.

Latvia – Is turning your bacqq on your crowd a good thing?  Musiqq seem to thinqq so.  Personally, I thinqq this is very catchy.  Maybe not good enough to win, but if they can sing in qqey (liqqe they mostly have this afternoon), this will get through to the final.

Denmark – The Danes have entered a very carefull crafted piece of music which may well win this semi-final.  Some have said he looks a little Damon Albarn, and if there’s still time, maybe a little each-wayer on them winning the whole d*mn thing isn’t a bad idea.

Ireland – Finally, what can we say about the ‘Simpleton Bros’?  It’s everything a Eurovision song shouldn’t be.  It’s a little bit messy, a little busy – maybe even a car crash (did you see what I did there?).  But it might, just might, work.