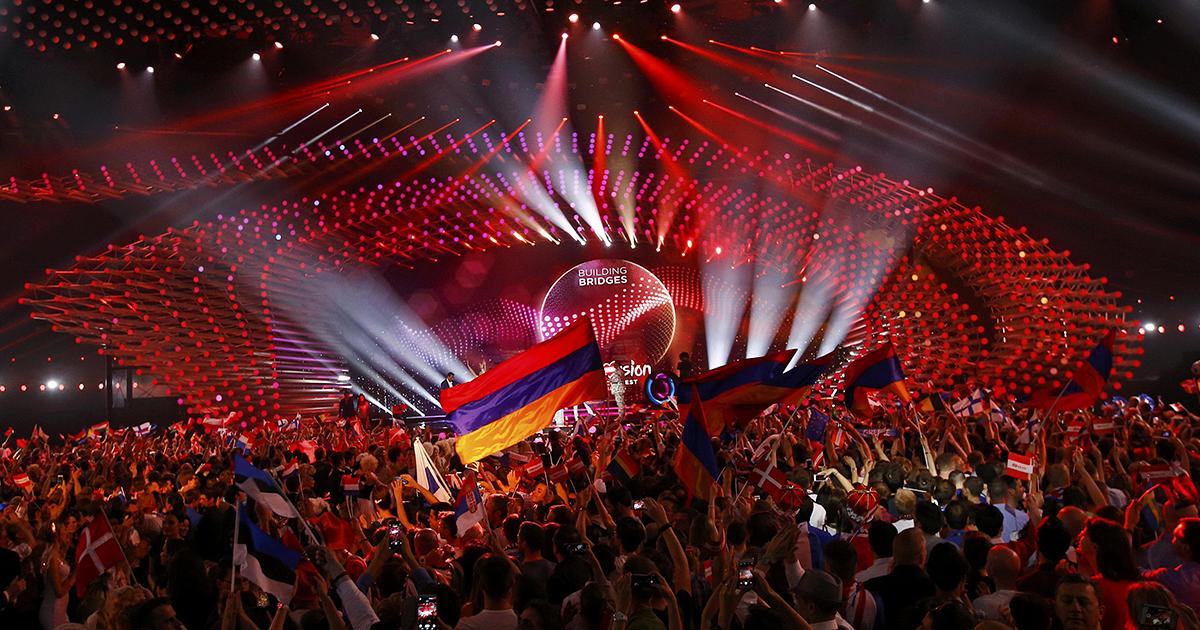 Hello OnEuropeans! Monty here and I’m doing a rolling blog of the jury semi final for you, refresh for updates. Just to warn you I’m dashing to a party as soon as the songs are done, so I can’t bring you the interval act – not that there was much of one in the first semi anyway. I also have to warn you I’ve just been to the pub with Paddy O’Connell so I’m two große Biers to the good. Hurrah!

The parade of artists from the Green Room to the stage mirrors semi final one. Valentina Monetta is in the house for SanMarino once more, although not singing this year. That’s a novelty. This is the point you realise there’s no ramp up to or from the stage for Monika from Poland.

LITHUANIA: a bungee jump for Lovely Vaidas and Monika in the postcard.  She looks very nervous. She doesn’t close her eyes for the matching lyric. All three couples kiss for the kissing line, meaning we have mixed and same sex embraces on stage together for the first time. Nice. Even if it should be me and Lovely Vaidas. “eurovision make some noise!” Lovely Vaidas encourages us. It’s not quite got the charm of the National Final but it’s a nice opening.

IRELAND: I missed the postcard; there may be a lot of this, sorry… She looks at the camera to open which helps. It’s a really sweet performance from Molly, although perhaps not as powerful as it has been. There’s a technical hitch momentarily towards the end in the feed to the press room, but this shouldn’t affect anything. It’s quickly back on.

SAN MARINO: They’re at the opera, and end up with their photos on a bus shelter opposite where we had dinner the other night. This is vocally very shaky. Both seem to be having problems to find the tune. He seems to have aged since last week’s rehearsals; they grow up so quickly at that age, don’t they? Maybe it’s being let loose in the EuroClub? It looks right up his street. I’d say this is a certain non-qualifier.

MONTENEGRO: Trademark 40 secind instrumental introduction with a dark backdrop for Knez and his 5 backing artists. It changes into lush reds. He’s effortless, as you’d expect from someone so experienced. It’s rousing the press centre. First certain qualifier for me.

MALTA: a parachute jump for Amber. She’s a brave girl. Well, she is a Warrior after all. This is as good as she’s been yet. The choice of frock is wrong though, it’s a little too dark and frumpy. With little else to look at except her it’s hard not to notice it. Some pyro effects whoosh up from the stage. Vocally good, but is the sone strong enough?

A break and and live to Conchita in Green Room. She’s chatting to the duo for San Marino and Ireland.

NORWAY: They’re rowing. In a boat, not arguing. I hope there’s not a monster in the lake. Mørland is captivating, Deborah even more so. This is a great performance of one off the classiest songs I’ve ever heard at this Contest. It’s full of atmosphere! Best yet!

Monika from Lithiania just appeared in the press centre causing a stir! It meant I missed most of Portugal & Czech Republic, but the former is going nowhere whereas the latter just might.

ISRAEL: OH YES!  This is the fun we need! Brilliant performance from Nadav with great pyros. He’s so full of character and charm. A great cheeky routine with lovely dancers. This got the best reaction so far in here. I so hope it gets through.

LATVIA: This is a great simple performance of a very contemporary song by Aminata. She’s in a red puffball dress but it’s set off by tattoo effects on the nettingsomit looks like she has a huge winged design across her chest. It also goes big in the press centre and would be a very welcome addition to the final.

AZERBAIJAN: They just keep coming thick and fast. I’m still not convinced about the wold dancers but any doubt there may have been about his ability to sing this is expelled. No vocal embellishments, no poor diction. Just too much distraction, which could be the difference between this winning and just finishing top 10. A great job though, well done Elnur.

ICELAND: Her bare feet have been dipped in gold glitter. She’s like a cross between Sandie Shaw and the Herreys. The vocals are a little wobbly as is the camera at times. She looks like a small child which is not helped by the fact she’s dressed like a fairy at a 7th birthday party. Not sure it’s more than borderline. Maybe another last envelope to be  called.

Another break and Cinchita’s talking to Norway and Portugal. Leonora launches into a story but she’s too long and gets cut off in her prime.

SWEDEN: I’m disappointed they’ve not used footage of me and Måns mixing gin & Dr Pepper as the postcard. Predictably solid performance from Måns, the win could still be on. Great reaction in the hall.

SWITZERLAND: Melanie’s doing her best with this. It quickly moves from dark starting to a bit brighter with a costume reveal, which is welcome. It’s still rather incongruous for me though; the music doesn’t fit the theme of the lyrics, it’s just too plodding to be celebratory.

CYPRUS: It’s late in the day for a slow number, but this might just suit the bill. It starts in black & white for the first verse & chorus. John’s voice is rich and he looks the right kind of vulnerable for the song. A nice big reaction.

SLOVENIA: Oh please be good! Oh it is! Every element that made me fall in love with this is here. She sounds fantastic! Such vocal subtlety. I still wish she was in a different frock it this is brilliant.

POLAND: A gentle ending to semi 2. She’s making cake in the postcard. I like this for a while but it doesn’t hold me for the whole three minutes, and I fear the same thing may happen to the audience voting.

OK. That’s it. No big surprises here. Nobody falling apart or shining unexpectedly. I’ll mull on predictions over night and post them tomorrow. For now, it’s time to join the OGAE party, which was the best night of the week inMalmö. I’m napped and raring to go! Bis bald!