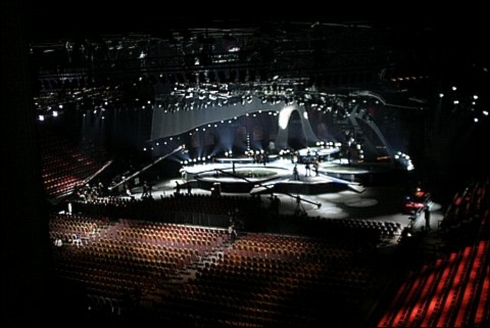 …time delayed by a mere 13 hours from when it happened. I had a definite urge to sleep when I got back to the hotel, given that Phil had been a bit under the weather all day, missed the rehearsal but does seem to be better again now.

I spent most of the show actually watching it on the big screens rather than on the stage, but I have to say I think they’ve put a good TV show together. I didn’t make great notes so I’ll miss things here. The presenters follow the tradition of trying to be funny and not quite managing it – she wants to co-present with George Clooney, he with Pamela Anderson; he wants to present in English, French and Turkish (because his grandmother is watching and only speaks Turkish) and he has what I can only describe as a Harry Hill moment. GOOAALLL!

The postcards look pretty much interchangeable; the artists aren’t featured, and it’s very much standard Turkish Tourism Board fare. If you’ve seen any Turkish preview video from about 1980 to about 1997, you’ll know what I’m talking about.

Finland makes for a damned fine opener, and I now buy it again. If Switzerland were 30 seconds shorter it’d be a possible qualifier, but it just gets too tedious by the end – I think. Latvia rocks my world, whereas Israel still makes me want the scary man to stop screaming at me. Especially the final note. Andorra didn’t impress me anything like as much as it did in their full rehearsal session.

Commercial breaks fall after songs 7 and 15, taking the form of brief green room interviews with Sakis Rouvas and Deen. I’m not convinced this is a good idea.

Malta gave mixed opinions. I think it looks alright, Michelle’s not so keen. But I would expect it to qualify.

Greece… no, like I said yesterday, it really is the Eurovision song you would buy from Ikea. I’m not impressed – still. Ukraine almost completely kills it, but I’m less sure about it winning than I was previously. It does completely kill Lithuania, which looks thoroughly pedestrian in comparison.

Albania is still impressing me… the Eurofanatics will recognise the reference to a poppier version of Edyta Gorniak (Poland 1994), and very likable. Could well be there for Saturday. Cyprus has turned it around. It’s no longer a little girl in a big world. It’s a young woman with lots of pleasing close-ups who nails every single note she goes for. A fair few people seemed to be talking amongst themselves though. I think she’ll be there near the very top of the table if she can do this twice.

(FYR) Macedonia looks slightly silly on TV unfortunately, which is a pity because he’s absolutely going for it and sounds absolutely splendid. Slovenia – immediately after the break – is looking like a bit of a talk amongst yourself number, and I don’t think it really came across.

Estonia on TV is looking like a “Don’t think so”. It almost works but not quite, and I want to criticise Peter the Estonian Drummer because I don’t think the stage slide at the end is a good idea.

Croatia… I think he knows he’s not going through. If he carries that through into an “Oh bugger it, let’s just give it anything anyway” performance as I suspect then he won’t finish last.

I’m deeply concerned about the voting system. You will see a chart on screen at the start of voting indicating the phone number for all 22 songs, but unfortunately the Finnish reprise ends with nine minutes of voting to go, and the Dutch one ends with about three and a half. I think that there’s going to be a massive bias towards the early and very last songs in the contest, and that some delegations will be asking urgent questions come Thursday morning in advance of the full contest.

After that, there’s a lot of drums, a tribute to ABBA with Rik Mayall in it, 10 second snipettes of the 14 direct qualifiers (preview video), and then the formal opening of ten white envelopes which are theatrically shuffled, each of which contains a heart and an increasingly annoying musical sting. I don’t think it’ll annoy me so much tonight though, as we’ll be more interested in which names are in the envelope. Finally, the ten winners are brought on stage, the positions 11-22 are flashed on screen for a couple of seconds, and we all adjourn for a couple of days to get our breath back.

I don’t actually know who’s going to qualify. Perhaps 15 or more deserve to, and not all the ones that are likely to deserve to.