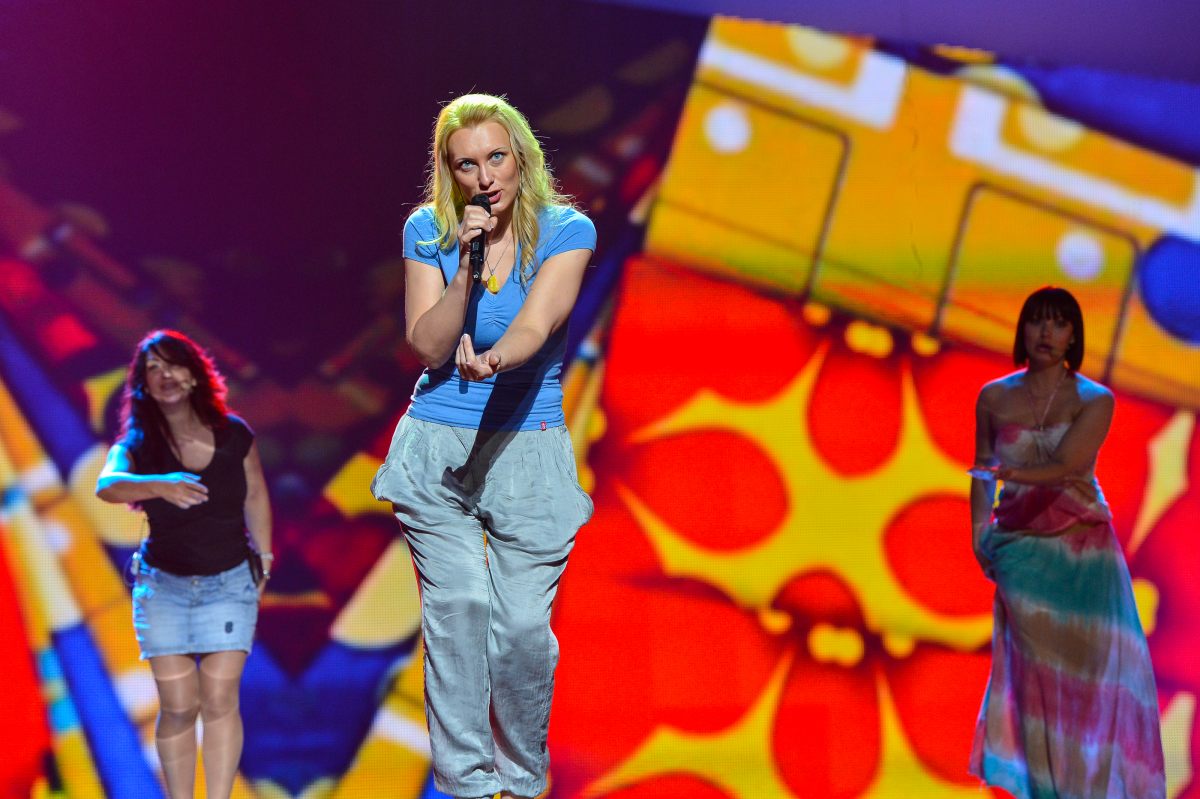 As an opener this was always going to be a bit of an oddity, but I’m surprised – and disappointed – we aren’t seeing anything wackier on stage. I mean, OK, there’s a Trojan donkey and some lissom youths parading about but Mr Amadeus appears to be just standing giving a rather deadpan delivery. Said youths unfurl banners with various lyrics from the song, a bit like a cheap version of the Ceefax subtitles and then appear to just stand around the donkey looking for a bit of passing trade. I’m in the minority of actually quite liking Rambo’s swipe at the mainstream, but you need a bolder visual to make the statement. This was never going through, but I was hoping for something more eye-catching and memorable from the performance.
Iceland
Whilst Montenegro has not delivered what I expected Iceland certainly has with a performance similar to the national final. It’s vocally strong and already polished, with Greta in her final frock. Or should I say semi-final not to jinx it? It’s got an awful draw, but this looks and sounds great already and it’s only really coming so early on that might not see it through. The backdrop of blues and frozen rugged terrain shows the stage and the set are already looking very versatile if not quite as impressive as the enormous backdrop in Germany last year. Jonsi looks strapping and Greta’s fiddling is captured in full 360° glory. Ooh it’s good!
Greece
If the Greek song is Greek-Eurovision-by-numbers and you like that kind of thing then you’re not going to be disappointed by the performance, which ticks all the same boxes. Elefteheria is flanked by 4 dancers with a backing singer positioned over yonder, much like Dana International in 1998 or the Balkan Girls in Moscow. The dancers are 2 male and 2 female, and Eleftheria has gone for a more wholesome look rather than some of the very fine swarthy looking specimens we have enjoyed in the past, which is frankly a bit of a shame. In keeping with the domestic situation it all seems a bit low-budget and lacking in a bit of energy, but it is just the first run-through. I’m left a bit cold by the Greek entry to be honest, as we really have heard it so many times before, but give me a beer and I’ll be jumping along and waving my hands in the air in the EuroClub next weekend.
Latvia
Four songs in and it looks like the more outré and bizarre elements of this year are being played down. Latvia’s delightfully tongue in cheek playfulness is looking vaguely like she’s now taking the beauty of her song all seriously. Gone is the jaunty titfer, the gossipy presentation with her girlfriends, and the galumphing dance moves in the chorus. And it doesn’t look like we’re getting a frock change mid-way as we did in the national final. Toning some of that down is a blessing, of course, but eradicating it entirely might be a curse. Vocally Anmary is very strong indeed, and perhaps she’ll still have that slightly deranged look about her close up on the telly, but from a static point of view at the moment this isn’t really working as you’d like it to.
Monty x

6 November – Go deep with me