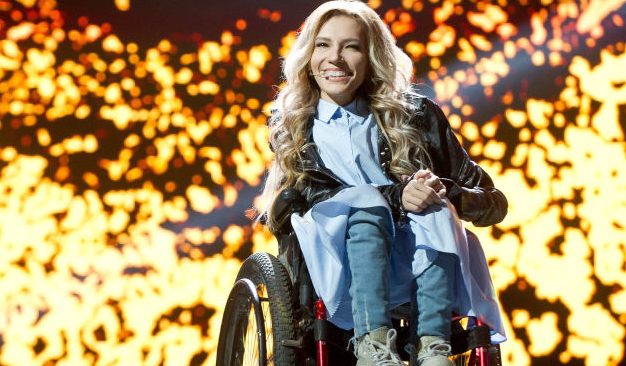 Eurovision 2017 looks set to tackle yet another difficult issue. The host nation may well deny entry to the performer lined up to sing for Russia.

There exists a list of 140 actors, musicians and artists banned from Ukraine; people who have shown support for the Russian annexation of the peninsula in 2014. Late last year, Ukrainian contest organisers made it clear that should any musician or artist on the list attempt to attend Eurovision, they would be turned away at the border. Gerard Depardieu, for example, would be unable to perform for France this year!

On Monday, Yuliya Samoylova confirmed that she had performed in Crimea in 2015. Her name does not, however, currently appear on the list.

Anton Gerashchenko, an MP and adviser to the Ukrainian interior minister noted that despite this, her admission has caused a diplomatic headache. Ukrainian security services need to decide if they should relax their rules and allow Samoylova in. Kremlin spokesman Dmitry Peskov insisted that the Kremlin wanted to ‘avoid any politicisation of Eurovision’.

Jon Ola Sand, Executive Supervisor of the Eurovision Song Contest, told OnEurope: ‘The EBU fully understands and respects the laws of Ukraine, and this matter has to be handled by the authorities, who we have had a good dialogue with since June.

‘In the spirit of the Eurovision Song Contest, we really hope to find a good solution, so that every delegation can come to Ukraine to participate.’

The Eurovision Reference Group took a calculated risk when they voted to allow ‘1944‘ into the 2016 contest. With its lyric recalling the deportation of Crimean Tatars, in the 1940s, by the Soviet Union, it should have sounded warning bells. The competition rulebook forbids ‘lyrics, speeches, gestures of a political or similar nature’. Perhaps those present reasoned that such an offbeat number would never win, especially given Russia looked set to walk it. They chose to ignore warnings that their decision might come back to haunt them. For once they needed to show strong leadership and not open a box they could never later close.