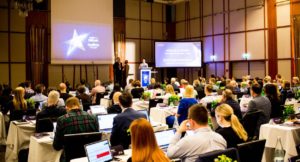 For each participating broadcaster, there must be at least one person available to act as ‘Head of Delegation’. The project manager who oversees all aspects of an entry to the contest.

They attend pre-contest briefings and meetings that take place between editions of the competition. Not all of these people are part of the Eurovision Reference Group.

During the Eurovision week, they head up the team from each broadcaster and make sure that all is going to plan. If an artist or anyone in the team is unhappy, they should channel their concerns through their head of delegation.

They may oversee or have a say in the national selection process, but this isn’t always their job. They don’t always look after accreditation, so it’s probably not worth sending them a begging letter if you’ve not been confirmed a bar stool at the Euroclub.

This list changes all the time, and if you find we’ve got the wrong person listed, feel free to let us know.