They may be close, but in the third part of my look back, the Juries begin to upset me! 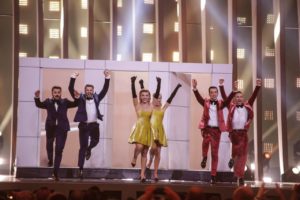 Not a lot to be said for this one as the averages tell the story. The televoters saw a bit of “continental Knockabout” and liked it a lot in their drunk state (I like the one with the boxes and the pretty women.) Juries saw lowest common denominator and poo-pooed it and, as such, dragged down the average scores. No surprises looking through the rankings, 4/5 Russian jurors placed it top to give it its only jury 12. Failing that, it scored in the lower reaches. Local televoters also liked it a lot, but there were slim pickings from most other places.

And again the disparity between the “people in suits” and “people that want fun” is displayed here – in even bigger numbers with Moldova. The actual jury placings for this song are shockingly low. There are many many 20+ scores, which even in this final is a touch rough (Yes Romania – 26 26 25 26 23 – I’m looking at you). 24 hours later, though, people around Europe got exactly what this was – Cod Viking Pop sung well by people that looked like Vikings! Shit, Europe thought, they know how to stage and act this song out – and we love Vikings – lets vote for it. Cue lots and lots of points. 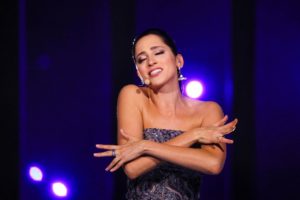 This one has flummoxed me. A 65,000 Euro dress clearly does translate to a top-ten finish, but I’m not sure how. It’s a very ordinary song, as far as I am concerned, and the juries and televotes seem to bear that out. Nothing outstanding from both. Average clearly equals a top 10 average result. Answers on a postcard (or a comment, Shi!)

For the third song in the last four places there is a HUGE disparity here between jury and televote. This time, however, the real people completely killed off the chances of this song. It could be argued that the song was deliberately aimed at juries and, to that end, it was spot on … but it was too clinical (or cynical) for televoters to think to themselves “That was the best song in the contest”. It clearly wasn’t either and, if honest, the televoters got the position about right. 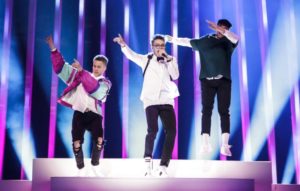 And yet again that good old disparity is shown here. The men in suits didn’t give this song a prayer, but the real people that make this contest what it is had other ideas, and gave it one of the highest average televoter positions in the contest.

If you’ve read this round of things you’ll have no doubt noticed that I’m not that happy about the calibration of the juries in this part of the draw. It could be that they just didn’t get the songs, it could need a re-balance … I don’t know, but … it’s narked me!

Denmark – I think it won the televote in 2nd semi, which helped the song qualify.
In the final they got a little bit more from the televoters but baring in mind its televote results in the semi, no one should be surprised about that.

Estonia – It was all about the dress but not everyone thought it was a worthy investment.

Sweden – At the end of the juries’ vote, I thought we are heading again to Sweden. Lucky for us all,the televoters thought differently.
There 2 things to ponder is –
1. the unconditional love the juries show to Sweden, no matter what Sweden sent. Maybe someone need to wake them up.
2.The fact that televoters have turned their back on Sweden and here Sweden can blame themselves. Why? because if you don’t show you are in the arena, and you ignore the audience, why should the audience vote for you. Being clinical and a cynical don’t land well at the audience(anyone that think that the televoters are stupid, need to re-think this ).

Czech republic – The telvoters pushed it up and in the process it passed Sweden.
The song may not be the best, but it felt alive and fresh. It wasn’t perfect or polished but the televoters forgave it, because no one is perfect. The juries thought it was childish. Juries don’t get it always right.