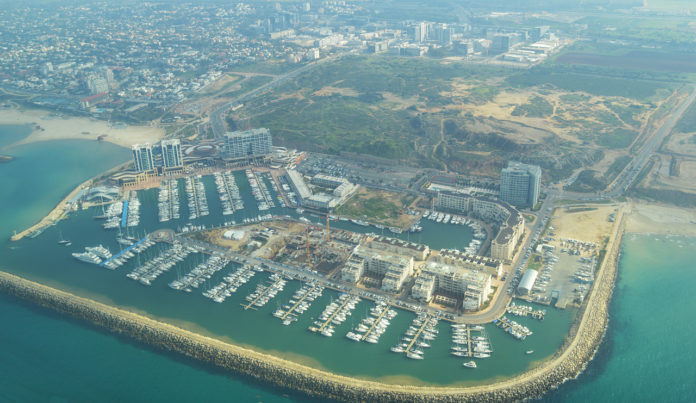 In these days of homogenised Euroclub delegation parties and infinitely stage managed artist appearances, you may frequently hear us older stagers grumbling away in dark corners about how much better it was in the old days, when you could eat and drink for free until your legs were full and wobbly, and have free and easy access to the artists in the wild. It seemed like the dewy-eyed mutterings of your old grandad who still insists that things were better in the war, and the young ‘uns used to roll their eyes whenever we brought it up. Until last night.

Because it so transpired that the good burghers of a local municipality stumped up from their own pockets to fund a bacchanal so delightfully free and easy that it brought a quiet tear to the eye of anyone over 38, like a third run-though by Paenda.

There we were, being bussed to the Herzliya Marina, where we were ushered into what looked every like a multi-story car park for posh yachts, where a massive bar flowed free with some of the weirdest shots of free booze all night (including enough whisky to melt a cat), while stalls proffered an endless panoply of local foods, and a smiling gentlemen with cooler bags stuffed tasty ice creams into the hands of anyone who looked like they’d stopped having fun for even a second.

The stars came out

And of course, the stars were out in surprising force, most of them unjaded by by a week of selfie requests and questions about the political situation in the south. 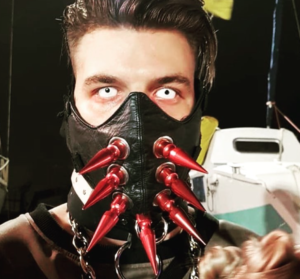 The biggest of the night were Hatari, who were followed around by cameras wherever they went. One of the finest moments of the night was watching Drum Gimp surrounded by snappers while he was was waiting in line at the knafeh stall, before tottering off on his uber high heels to hide behind a boat so that he could take his mask off and eat his dinner in peace. But much to everyone’s surprise, the band were all sweet and approachable, and were happy to pose for even the dumbest photos – even if they did click into deadpan character the second before the shutters clicked.

Bilal was milling about amiably in semi-incognito with his natural hair on. The lad is like a tiny sparrow of a boy, but wickedly funny, and happy to chat to everyone. A sound kid, in a way that we really hoped he’d be. 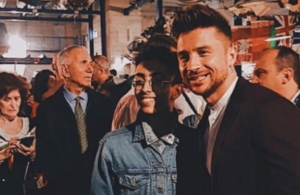 Russia’s Sergey and his handler Big Phil breezed in for cold, unemotional photo ops, before quickly melting into the night, the polish gals from Tulia were happy to chat to anyone who breezed by, and were all decked resplendent in matching shiny ball gowns. In a candid chat, one of the blonde ladies told us that their performance was so far removed from the way that they traditionally perform that they were a bit anxious about how it would turn out, but they seemed to be doing a good job to my jaded old eye. They seemed like a smashing little girl hang, so I hope it turns out nicely for them.

It’s always a bit tricky to ascertain exactly who is an artist this early into proceedings, as you’ve not seen them doing press calls, and they generally have their party hair on, but in these cases you tend to follow the lights from the TV camera and hope they’re not a local newsreader or weather girl. But we’re pretty sure that Tamta from Cyprus and Nevena from Serbia were doing the rounds quite graciously, Lithuania’s Jurij was quietly standing back and taking it all in, Jonida and the entire delegation were marching about beneath a waving double-headed eagle flag all night, and Sarah McTernan from Ireland just did that delightful normal-girl-at-a-posh-do thing and tottered to the front in her giant party frock to dance with her hands in the air – and she clearly just didn’t care. She’s one of us, McTernan, and we’re very glad of it. 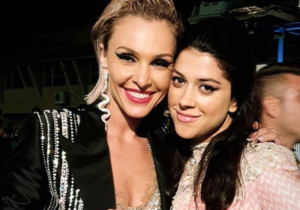 Elsewhere, Joci from Hungary, Zena from Belarus, those repetitive Latvians, and, rather surprisingly, the Maltese delegation, who had a punishingly early start today, were all seen lurking in the shadows. Oh, and far from being the terrifying horse murderer that his performance suggests, Oto from Georgia turned out to be the most humble, gracious gentleman that we’ve met at this thing for a very long time.

But our favourite of the lot of them was the delightful Paenda. She’s friendly as hell, hilarious to chat to, and knows her place in the Eurovision firmament, and is just happy to be a constituent part of it. After her enormously emotional performance yesterday we hope she does well at this thing, because it was a genuine pleasure to meet her.

Oh, and if that wasn’t enough, lovely Shiri Maimon did a gig too! 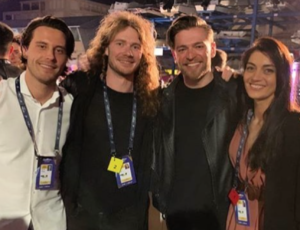 This, dear reader, was how Eurovision opening parties used be in the old days before the world got poorer and we all started feeling guilty for having fun. We know that it’s an expensive extravagance that probably belongs in the dustbin of indulgence, but hell, it was a glorious throwback to simpler, more extravagant days that was an old-fashioned delight to attend.

Then, as we were staggering our way back home in the town centre we bumped into Swedish Jon, minding his own business and eating an ice lolly with his two pals. We may just have caught him at a bad time, but he certainly didn’t live up to his sunny on-stage persona. But that aside, it was really nice to meet a few of the artists ahead of the carefully crimped opening do and get to the heart of their personalities in ways that we’ve not been able to do for some years. And that’s what these kinds of parties are really for. Although the endless flow of vegan shawarma was also pretty gladly received…