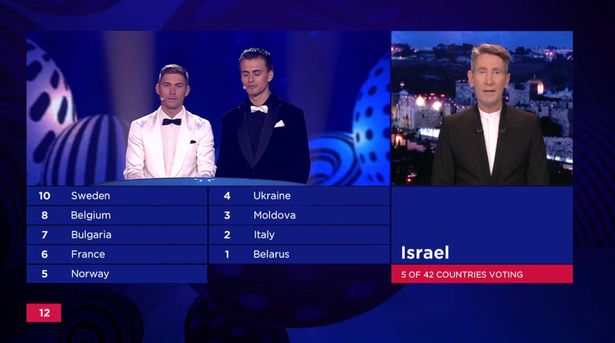 Pretty Simple really.  He and his delegation thought they had it in the bag “cos Australia” – sadly, how about no? A narcissistic backing video and a very dodgy vocal charmed the juries, but the televoters saw right through it

A nice round figure for Hungary proving that language shouldn’t be a barrier to a good score if people get the song. During A Dal I thought it was bland, then I saw it on stage in Kiev and got it instantly. It isn’t overly ethnic but has a whiff of the old country, enough not to scare people off.  The dancer wasn’t overdone and overall not bad.

I genuinely don’t understand how this managed to get this high. I know it’s the “fun” song but really it’s nothing other than a hairy bloke shouting and attempting to ride a cannon. Surely this kind of thing doesn’t go big in this contest anymore? Well, apparently it does. Televoter friendly, sickeningly, but the juries rightly punished it for being shit!

Whilst this is clearly a low result, it needs analysis. I suspect that people went “MONKEY” and voted for cannons and class, rather than a fun song that had a monkey that wasn’t a gimmick. It seems as though it didn’t connect with the audience (despite “Ale” and other words to get the audience going) and the juries clearly saw better songs. Joke entries don’t win San Remo they say, but Italian “fun” doesn’t work either.

Again, another one from the Stunned of Staffordshire quota of results. I’m not sure what kind of appeal you need to be a sulk these days but by god, Blanche seemed to have it in spades. To me, though, her voice seemed ill-suited to the look she was projecting on stage. That voice and that face don’t go together in my opinion. People will tell me it’s “real” music, “chart” music even, but I just don’t get who she connected with!

In the same way Romania went high (because it was a bit of fun), Moldova went the same way. This was a sledgehammer attempt to get the televote out and remind Europe of Epic Sax Guy. I wonder how many points he on his own garnered.  Is the song the third best in this competition? No, but it was consistently picking up drunken telvoters in sufficient numbers to climb the table.  Juries, however, not so much.

When a country scores 337 in a televote and still doesn’t win, you have to stand and applaud. Bulgaria’s highest ever placing was a mix of Kris and his vocal range, a well-constructed song and a presence that belied his years. If Portugal had entered any other song, this would have topped the board. Because of that, he and the delegation need applauding. If you’re gonna do nothing wrong and still be beaten, be beaten by the best.

The best there has ever been under any scoring system.  This one or the old one! It’s a man singing a song down the camera at me at its simplest level. A complex and free-form performance by Salvador at its most complicated. This song has layers for everyone, and charmed the pants off people across the continent. It is just fabulous.