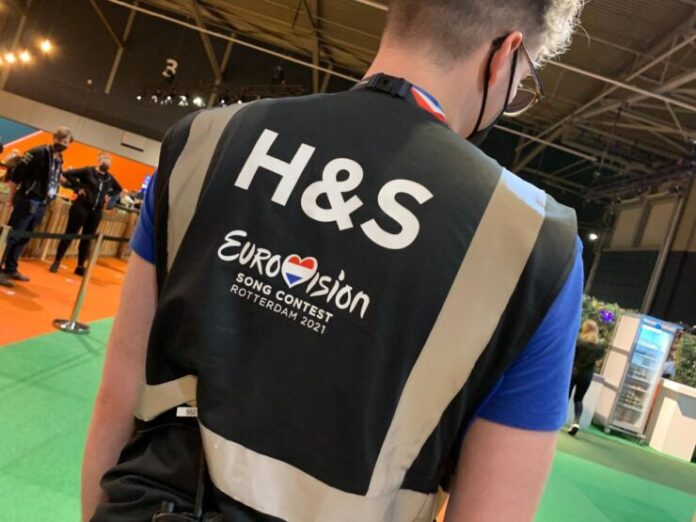 I’ve levelled up! I’ve finally earned my “Getting to the virtual press centre in time for the day’s first rehearsal session” badge. I’ll add it to the pile with all the others.

It’s also been mentioned that I’m slightly overdoing it with the dad jokes in these reviews, to which I can only reply “They’re not dad jokes, they’re Dadi jokes, now go fetch my newspaper and slippers”.

Tornike from Georgia is everybody’s 2020s Dad, I think, and I’m in adoration of his utterly deadpan trolling of the press centre.

It takes a special kind of person to sing so entertainingly badly when he’s already proved earlier in the session that he has the chops and experience to sing beautifully. We have a gap in the market for a latter-day Les Dawson, so why not? I’m not overly persuaded that he’s made such a good job of selling his song to a non-Anglophile audience though, it never really manages to become the sweeping visual epic that it had the potential for and the preview video suggested, and it does risk being overlooked as boring when it needn’t be.

I’m also worried about Albania’s Anxhela. What I HOPE that everybody notices is that she’s an utterly seductive minx, alone on stage and totally in control of it, singing her heart out like it’s not still Week 1 Day 4 Morning 1 Hour 1. What I actually noticed, and couldn’t completely escape from, was the fact that she’s interacting with plumes of red and blue smoke on the screens behind her, leaving behind a slightly deja-vu tinged sense of “Oh, I’ll add that one to the pile”. She and the song are easily good enough to overcome that little doubt in this semi, and if her ambitions don’t stretch beyond just hitting the left hand side of the final scoreboard, I think she might well hit her targets.

The Black Mamba for Portugal… if I’m in a harsh mood, there’s nothing they’re doing that I’ve not seen before. Transitioning from 4:3 monochrome to stunning HD is not new. Being Real Musicians is not new. Using screens to create the illusion that there’s a full orchestra on stage with them… actually, that bit probably is new, and it’s well realised. And I’m not in a harsh mood, because even though it’s likely to be almost entirely choreographed realness, you have to be terribly cynical to spot it. As I often say, there’s no Nick in cynical… oh. Somebody at my virtual table points out that transitioning back to black and white for the last few seconds could easily seal the deal, and I’d like to see them try that. Contrasted with what seems to be a sea of blue and pink neon elsewhere, this is easily different enough to stand out.

Bulgaria’s Victoria is providing something unusual and a little unwelcome – a staging where I’m absolutely transfixed and sold by the first minute or so of a tiny, claustrophobic setting and shot selections, only to become less and less sold and transfixed as it develops out onto the wide open spaces of the big stage. I don’t like enjoying a performance LESS as it progresses. For all my doubts about the song, it feels like Bulgaria might have missed an open goal for a possible victory. It’s a pity, because that first minute is as fragilely beautiful as anything I’ve seen in Eurovisionia for a while.

Right sirs (and lady sirs), I need to head off to the virtual press centre gym I think. I’ve seen what’s coming up on Week 1 Day 4 Afternoon 1, and there’s no absolutely way I’m tackling THAT lot without getting a certain amount of pre-exhaustion and isotonic refreshments on board.