See all of our on-the-spot reports from Moscow 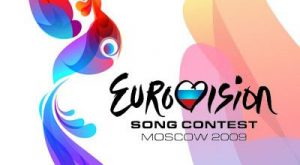 The contest was won by Norway’s Alexander Rybak with his self-penned “Fairytale”, which received a record-breaking 387 points out of 492, at the time the highest total score in the history of the contest and with a margin of 169 points over the second place which went to Iceland. Third place went to Azerbaijan, fourth to Turkey, and the United Kingdom taking 5th, seeing their best placing since 2002.

After criticism of the voting system after the 2007 Contest, changes in the voting procedure were made with the re-introduction of a national jury alongside televoting while the format of the semi-finals remained the same. Forty-two countries participated in the contest; Slovakia announced that it would return to the contest, while San Marino withdrew due to financial issues.Latvia and Georgia originally announced their intention to withdraw, but it was later stated by the European Broadcasting Union (EBU) that both countries would indeed participate. However, Georgia later decided to withdraw after the EBU rejected its selected song as being a breach of contest rules.

For the very first time in Eurovision history, there were four hosts, each divided in two sets: Natalia Vodianova and Andrey Malahov were the hosts of the semi-final, while the final was presented by Ivan Urgant and Alsou Abramova.