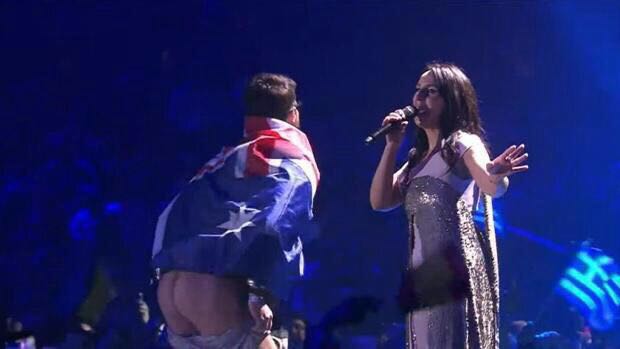 Eurovision winner Jamala didn’t miss a beat when an audience member climbed on stage and mooned. Draped in an Australian flag with his trousers round his ankles, the invader was quickly dragged off stage and presumably ejected.

He has been identified as infamous Ukranian prankser Vitalii Sediuk, who has a history of hassling celebrities including Brad Pitt, Miranda Kerr, and Kim Kardashian at major events.

BBC commentator Graham Norton – who had warned of flashing images but not flashing Ukrainians – was forced to apologise.

There had been immediate condemnation from Australia’s official fan club who said they were disgusted by the behaviour.

The twittersphere, generally speaking, thought the whole thing hilarious and a bright spot in an otherwise underwhelming interval.