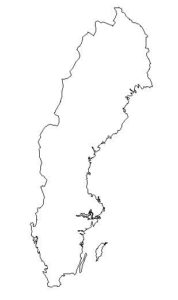 We all love a Swedish song. Well, for some fans the contest begins and ends with the country of the yellow cross on a blue field. Admittedly, they have put some choons forward in their time (Sweden that is, not the fans), but they’re not alone in that.

Well, today, we’ll concentrate on the country gunning for its seventh win. Today’s birthday boy Benjamin Ingrosso won the golden ticket to Lisbon. The son of Saint Pernilla Wahlgreen, the omens were good. And you could say that the setting from the mainly Swedish production crew would be very sympathetic. Nevertheless, his little song with his stripey lights was a better attempt than the year before and he warranted his seventh place. Best Nordic in Portugal, and stacks of maxima from the juries, but none from the televoters. His was a truly polarising performance.

Since 1959, the Swedish entry has been chosen through an annual televised competition, known since 1967 as Melodifestivalen.

At the 1997 contest, Sweden was one of the first five countries to adopt televoting.

Sweden is one of the most successful competing participants at the Eurovision Song Contest, with a total of six victories, second only to Ireland’s seven wins, and has the most top five results of the 21st century, with 11.

Cornelia Jakobs will represent Sweden in Turin at the 2022 Eurovision Song Contest with ‘Hold me closer’.