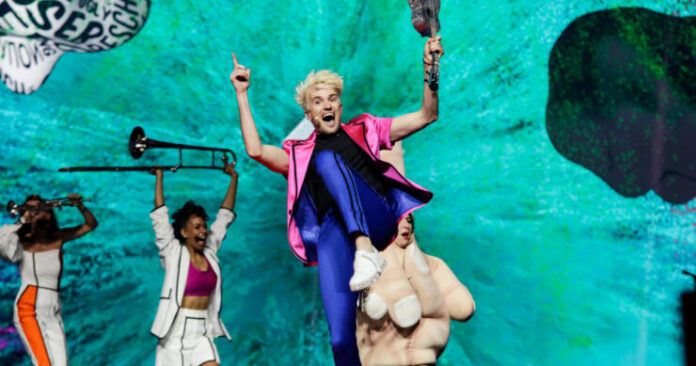 Jendrik has done it. Congratulations. I no longer feel hatred for this song. Lord knows I should; it really is as annoying as fuck, but Jendrik’s even thought of that, and he’s wearing a necklace that says ‘annoying’ on it. It’s like he’s a step ahead of us all at every move, and yes, I guess that is quite annoying in itself, but I truly do not hate it. And THAT’S annoying in itself too. How des he do it?

Almost everybody’s written this off, but I still think he’s going to do OK. Apparently, this was initially rejected by the German broadcaster, but Jendrik worked on building his TikTok profile until they relented. They say God loves a tryer, and Jendrik is certainly trying, but you have to admire such persistence commitment to the cause.

He has given himself quite a task. There’s a lot going on here, and he’s written a lot of words into the spoken section, which he doesn’t really find himself able to speak in a way we can hear them, but I don’t think that’s really the point of the performance. There’s a hint of loose cannon to Jendrik too; there’s just enough to suggest he might go off script in the final.