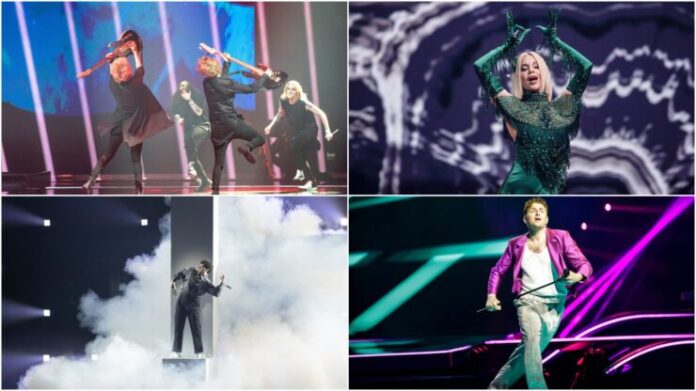 I’ve timed everything wrong today, and thought we had a lunch break after Bulgaria, but it’s after Finland. It’s destroyed my symmetry for a four and four update, so I’m sticking to my guns and not the schedule, which means it’ll be ages before you get to read this. 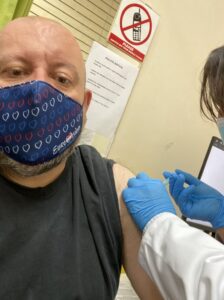 I have, however, used the lunch break wisely. Get vaccinated. But don’t forget to get lunch too, which I’ve also done. Bugger!

The queen of the night is… keeping us waiting. It’s taken her 9 years to finally get to Eurovision, so I suppose another 13 minutes isn’t going to hurt. I mused the other day that the performance had less something of the night about it than something of the gloaming. It had more of a twilight feel than a true adventure through the remainder of the evening. I want to really see Samanta Tina vamp it up. It’s taken her so long to get here, I don’t want to see her fizzle away on Thursday.

I know there are plenty of people struggling to connect with this great cacophony of sound, but it’s clicked for me. I love that it’s complete nonsense. But Samanta isn’t giving me enough crazy. I really did hope for more.

The backdrop is a psychedelic, kaleidoscopic fury of golds and browns, and a hint of the same greens that Samanta and the best three backing singers of the entire Contest are wearing. I already find the green a little off putting and at times it’s overshadowed by the enormity of the backdrop. I want Samanta to be bringing the interest, not the projections. At times she finds herself in the last place Samanta Tina needs to be, and somewhere I never thought we’d see her – blending into the background.

I don’t think this is going through.

Can confirm we’re running approximately 16 minutes late. This is entirely superfluous information for you as I’m only posting this after Denmark, but I like to appraise you of the detail. It makes us look like we’re focused professionals.

Time for more moody introspection. Hurrah! It’s Switzerland, and to be fair I did rather rate this in the first rehearsal. Today I want to see if Gjon has tightened up the chorography a bit. I quite liked the idea, but the execution was a bit school drama club. The rest of the staging has real impact though.

A couple of moments of stuff going on around him to today up: a camera shadow in shot here, a props mover there, but this is technical stuff so nothing to worry about.

I’m not sure if the movement over complicates this. It is both unexpected and distracting. I’m not convinced of the outfit either. The slacks are so high-waisted they’re halfway up to his nipples and not in a flattering cut, and they’re paired with the kind of showy grown-up shirt your mother might have put you in for your 10th birthday party in 1978.

I think they’d have complimented the genuine impact of what’s going on with the music and light show building by not having Gjon to do anything that’s a bit funny-looking, which to be candid, this is at times.

Going back to the criteria the jury are asked to assess against this does tick all the boxes, so by following instructions this should have an easy ride. Will it be judged as fairly by the viewers at home though? He might have a tougher task there.

And so we come once again to Denmark, and the last of today’s performances. Everything that didn’t work with this on Tuesday is still not happening. Some of the moves are so consistently just off the beat that either he’s rehearsed them wrongly and now can’t change them or they’re meant to be like that. There’s still not enough time for his run to the satellite stage and back and it all looks way too rushed and awkward. And I really want to put him through the wash.

After a break of proper pop songs since Serbia all the way back at song 9 the change in pace might get this over the line, especially as this is by far the weaker semi-final, but it wouldn’t add anything to the final for me.

Voila! That’s a wrap for today. Presumably the spare afternoon for us is being filled with rehearsals for the bits we don’t see until the shows: interval acts, openings and the green room transitions.

Back tomorrow for the final song rehearsals with a second look at the host and the Big 5. Over and out. Now what to do with a free afternoon…?