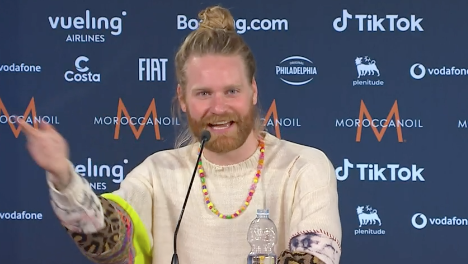 Sam Ryder will carry UK hopes into Eurovision this year. His song ‘Space Man’ is widely tipped to bring the country its best result in years. After his first rehearsal, he sat down for a press meet and greet.

“The dream is to go into a studio and write a song with people it feels effortless,” Sam said when asked about how he wrote his Eurovision entry. “A good song should feel like it just comes from some place, and that you’re lucky enough to be there and catch it. You have to get out of the way and act as a conduit. That’s what happened the day I wrote ‘Space man’.”

Sam has gone from singing Britney Spears covers in his mother’s kitchen to 12 million TikTok followers – and now Eurovision. “Every day I try to remember it could so easily have not happened. I remember to show gratitude. No matter where our journeys go, it’s important to always come back to that thankfulness and realisation of how you’re lucky to have the privilege to do a job you enjoy.”

With the UK having a poor recent Eurovision record, we had to know if he saw taking on the job a poison chalice? Sam laughs. “My heart always tells me to go for any opportunity. So few people get to experience Eurovision. I dreamed of a career in music, even though it’s a dream where the odds were against me. When I got the Eurovision call, as a fan, I figured I had a responsibility to be stoked. My heart said yes straight off. It was only after I put down the phone that I worried about what if I get no points and never work again. But everyone gets negative thoughts. The thing to remember is these come from within us, not from the world around, just like being excited comes from within. How we deal with our opportunities matters. If you think negative, it shows.”

Every trip I’ve made, I’ve been met with kindness and warmth …
He believes Eurovision is a huge opportunity for anyone looking to build a career in music. “It isn’t just about three minutes on a Saturday night TV show. What matters is how you carry yourself from the start right up to when you walk off stage after the performance two months later. The build-up is vast and long and there’s so many chances to spread the word about what you’re about.”

Sam admits to avoiding the internet since landing the Eurovision job. “For every good thing you read, there’s an equally bad one waiting. And the bad ones always stick in your mind. I couldn’t help but hear about the odds. Everyone keeps telling me. I’m just so happy and grateful that it’s marking a shift in British attitudes to the Contest. People are getting behind me, getting excited and backing the song.”

The tabloids blame bad UK results on Brexit and such. Does Sam buy into that. “For the record, I don’t subscribe to the idea there is any kind of ill feeling towards the UK. That is , like I said before, a negative way of thinking. It starts at the level of the media and big talk almost always bleeds into small talk. Every trip I’ve made promoting my music, every show I’ve played, no matter where in the world, I’ve been met with kindness and warmth and love. If I have any hope, it’s to change attitudes and not just about how the world sees us in Eurovision. Imagine if you can do that. I think it’s possible.”

“What stokes me most is that I look around an empty arena at empty seats and know that on Saturday, there will be people sat in them. Passionate fans. And I’ll feed off their energy. Not to mention 200 million following at home. Kids with their families, people in love with music and I get to be a part of that story.”

Now and then, OnEurope gets chatty with the people who bring Eurovision to our screens three times a year.

During the ‘on season’ we try our best to filter out the ‘what’s your favourite Eurovision song’ and ‘has the experience been great’ and ‘what food have you eaten’ or ‘did I leave my pants in your bathroom?’